Opinion
Well he was a hard worker 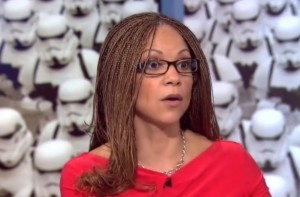 “I know why I have feelings — good, bad and otherwise — about Star Wars,” Perry explained. “…I spent the whole day talking about the Darth Vader situation.”

“The part where he was totally a black guy, whose name was basically James Earl Jones,” she said. “While he was black he was terrible and bad, awful and used to cut off white men’s hand, and didn’t actually claim his son. But as soon as he claims his son, goes over to the good, takes off his mask and he is white — yes, I have many feelings about that.”

Mediaite’s resident Star Wars experts have looked into the issue and determined that Perry is wrong.