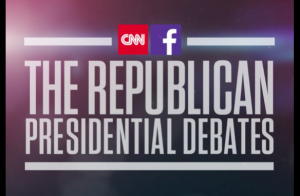 The GOP Debate will air live on CNN, CNN en Español and CNN International. A live stream of the debates will also be available on CNN’s homepage and on mobile platforms between the hours of 5 p.m. ET and 11 p.m. ET.

The Salem Radio Network will air the debate live as well coast-to-coast.

Find out the schedule for the GOP Debate here, and check back for Mediaite coverage throughout tomorrow night’ events.
[image via Twitter]