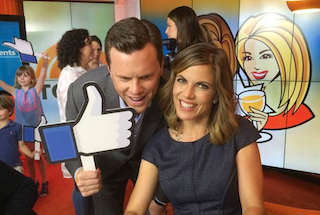 On Wednesday, Us Weekly magazine posted an “exclusive” story stating that Natalie Morales and Willie Geist had been fired from their roles as co-hosts on the Today show. The report has prompted NBC News president Deborah Turness to issue a statement categorically denying the rumor.

The Us piece cites an NBC “insider” who said Morales and Geist “were recently told they were fired,” and had already lined up new gigs at CBS and ABC, respectively. But then, shortly after those cuts were made, NBC fired Today general manager Jamie Horowitz after he spent just three months on the job.

“NBC’s Today has the best anchor team in morning television,” Turness said in a statement Wednesday. “The entire Today show anchor team — Matt Lauer, Savannah Guthrie, Al Roker, Natalie Morales, Willie Geist, Carson Daly, Tamron Hall, Kathie Lee Gifford and Hoda Kotb — are incredibly talented, valued and have our support. In response to the false rumors that have been circulated about our anchor team, NBC wants to be absolutely clear: The rumors are wrong — period. This is the team we are committed to. And this is the team that our viewers turn to in the morning.”

In her previous statement on Horowitz’s firing, Turness claimed that it was a mutual decision, saying, “together, he and I have come to the conclusion that this is not the right fit.” However, several news outlets quoted unnamed NBC sources as saying the former ESPN executive was fired from his position, possibly, in part, for leaking accounts of behind-the-scenes conflict to the press.