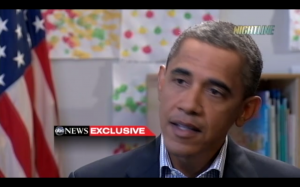 President Obama sat down for an interview with Nightline‘s Jake Tapper, and hit on a wide range of issues, from his frustration with filibusters to his willingness to pay more in taxes. But the sentiment that might stick out for most people was his assertion that Tea Partiers and Occupy Wall Streeters are more similar than they may even realize:

“I understand the frustrations that are being expressed in those protests. In some ways, they’re not that different from some of the protests that we saw coming from the Tea Party, both on the left and the right. I think people feel separated from their government, that the institutions aren’t looking out for them and that the most important thing we can do right now is those of us in leadership, letting people know that we understand their struggles, we are on their side and that we want to set up a system in which hard work, responsibility, doing what you’re supposed to do, is rewarded, and that people who are irresponsible, who are reckless, who don’t feel a sense of obligation to their communities and to their companies and to their workers, that those folks aren’t rewarded.”

Obama also said that he’s “not spending a lot of time” worrying about who the Republican candidate is going to be, but guaranteed that the 2012 election is going to be a close one. He feels that even though his choices may have been correct, there are still difficult economic circumstances from which the country has not yet emerged. “That means people who may be sympathetic to my point of view,” Obama explained, “still kind of feel like, ‘Yeah, but it still hasn’t gotten done yet.'”

Watch the video of Obama comparing OWS to the Tea Party below, courtesy of ABC: