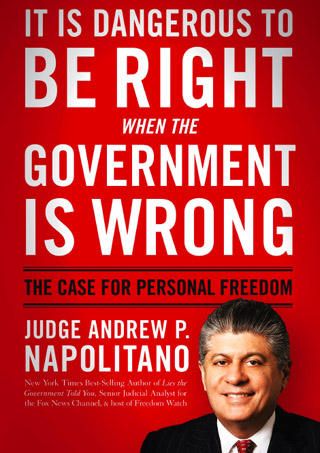 Between the years of protest on the far right and the increasingly vocal demands of the far left, no matter what the government is doing– whether it be foreign policy initiatives or monetary policy– there appears to be a consensus in American politics that it’s doing it wrong.

So perhaps there is no timelier occasion for Fox Business host Judge Andrew Napolitano to release his new book, It’s Dangerous to be Right When the Government is Wrong, than this week– an expository volume on how America got so off-track from where the Founders placed us and how to navigate the way back. Mediaite caught up with Napolitano earlier this week via phone, where he gave us some insight into why the two-party system is an illusion, the government’s insistence on giving and taking rights is unnatural, and why electing a Congress full of Rep. Ron Pauls could be the solution to our problems.

“What we’re seeing today is a government that treats us as if it were the source of our rights, and not our servant, and the source of our rights is our humanity,” Napolitano explained. The book– dedicated to Rep. Paul as one of the few public servants Napolitano appreciates has the discipline to resist power– outlines the various transgressions of the American government in detail, highlight the source of most of the major problems America is facing today. Unlike many modern political books, Napolitano bases his observations herein on legal theory, not exclusively modern journalism. The first few chapters are a crash course on natural law as a legal theory.

From gun control laws in blue states to Tea Party protests, American political life is filtered in the book through the natural law as observed by everyone from Voltaire (whose aphorism lends the book its name) to Doctors of the Catholic Church St. Augustine and St. Thomas Aquinas and protestant thinkers like John Locke. It can feel a bit like reading Marie Curie’s diary to figure out how to operate a microwave, but the payoff to saddling a political argument on thousands of years of political thought is refreshingly high in a world where most pundits resort to little more than “because I say so.”

Napolitano admits that turning so far back to understand our country today means a lot of religionspeak, and that for those who believe in the soul as an immortal entity, its value is determined by its nature. But that is not a belief that makes natural law a theory inaccessible to secular thought. He defines in his book natural law as a “truism,” much like laws of science, like gravity or, for most, evolution, that, in his words, “no rational person can challenge.” In this category he places natural rights as existing both outside of politics and religion: “That we all possess the free will to pursue the truth, the intellect to recognize and accept it, and that its pursuit is the ultimate goal of human activity, is the ultimate truism.”

This he fleshed out to Mediaite a bit more as explicable as a product of natural selection. “We all yearn to have private property and have dominion over it. We all year to have opinions and to express them, to be left alone, to be free from the unwanted gaze of our neighbors or the government,” he explained. Much like gravity, natural law is an observable phenomenon.

NEXT PAGE: Philosophy is all well and good, but what does this have to do with the economy in 2012?