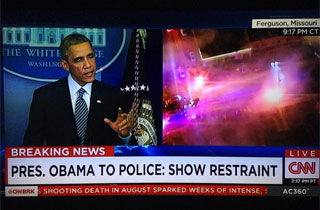 During his statements urging for calm in Ferguson, President Barack Obama also suggested that, in the coming days, the media focus on positive solutions to the civil rights issues that erupted in the aftermath of Michael Brown’s death at the hands of Officer Darren Wilson. “There is inevitably going to be some negative reaction, and it will make for good TV,” he noted.

Which makes these split-screens, most of them coming from the same live feeds, so gut-wrenching:

Surreal split screen: Obama calls for restraint as what looks like tear gas is deployed in #Ferguson pic.twitter.com/97W3YwGeHn

"There is inevitably going to be some reaction that makes for good tv" don't think he knows whats in the split screen pic.twitter.com/EeEByxFp7A

This is so bad RT @GPollowitz: Obama split screen via CNN pic.twitter.com/mFIKfwN1SH”

This is the split screen. He is speaking of peaceful protest as they flip cars. #Ferguson pic.twitter.com/Qn6YYAKHDx

Calling it now. Conservatives are going to use #msnbc's stupid #ferguson split screen as a campaign ad #2016. #fail pic.twitter.com/lPt0KklExF

And the question of the night, from Ta-Nehisi Coates:

Oh this image. Good God. Can the White House people see this?