Obama to Sharpton on Red State Dems: ‘These Are All Folks Who Vote with Me’ 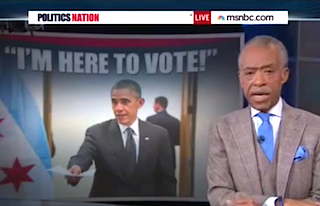 Democratic senators running for reelection in red states may be trying to distance themselves from President Barack Obama, but in a radio interview with Al Sharpton Monday, the president pulled them back in. Sharpton played clips from the interview on his MSNBC show Monday afternoon, including one in which Obama assures voters that those Democrats are on his side.

Describing the “tough map“ that Democrats face in this year’s midterms, Obama told Sharpton, “A lot of the states that are contested this time are states that I didn’t win. And so some of the candidates there — it is difficult for them to have me in the state because the Republicans will use that to try to fan Republican turnout.”

“The bottom line though is, these are all folks who vote with me, they have supported my agenda in Congress,” Obama added, citing the minimum wage and fair pay as issues on which they all agree. “This isn’t about my feelings being hurt, these are folks who are strong allies and supporters of me,” the president said.

Obama said that he has told the candidates, such as Lousiana’s Mary Landrieu and Arkansas’s Mark Pryor, to “do what they need to do to win,” while he focuses on voter turnout among traditionally left-leaning constituencies like African-Americans.

The right immediately jumped on the president’s comments as proof that Democrats running for Senate in states the Obama lost as more liberal than they let on to voters, with the popular GOPICYMI YouTube page posting the clip below shortly after it aired. The conservative Washington Free Beacon site described the latest statements as “devastating” for those Democratic candidates.