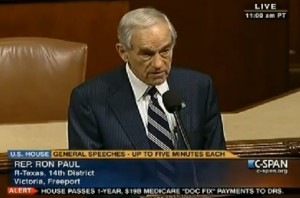 Ron Paul is nothing if not an conservative iconoclast. The Texas Republican House Representative, with deep libertarian roots is taking a counter-intuitive departure from the traditional and established GOP rhetoric on the issue of WikiLeaks. In an impassioned speech on the U.S. House floor, Paul likened the attack on Julian Assange to “killing the messenger for bringing bad news” before providing nine provocative questions for Americans to consider.

Mr. Paul concluded his speech with a list of questions for the American citizens to consider, the transcript of which is below (via FromTheOld.)

Number 1: Do the America People deserve know the truth regarding the ongoing wars in Iraq, Afghanistan, Pakistan and Yemen?

Number 2: Could a larger question be how can an army private access so much secret information?

Number 3: Why is the hostility directed at Assange, the publisher, and not at our governments failure to protect classified information?

Number 4: Are we getting our moneys worth of the 80 Billion dollars per year spent on intelligence gathering?

Number 5: Which has resulted in the greatest number of deaths: lying us into war or Wikileaks revelations or the release of the Pentagon Papers?

Number 6: If Assange can be convicted of a crime for publishing information that he did not steal, what does this say about the future of the first amendment and the independence of the internet?

Number 7: Could it be that the real reason for the near universal attacks on Wikileaks is more about secretly maintaining a seriously flawed foreign policy of empire than it is about national security?

Number 8: Is there not a huge difference between releasing secret information to help the enemy in a time of declared war, which is treason, and the releasing of information to expose our government lies that promote secret wars, death and corruption?

Number 9: Was it not once considered patriotic to stand up to our government when it is wrong?

Watch the entire speech from C-Span below: