Roseanne Barr: Rich Should Be Beheaded If They Don’t Give Up Wealth 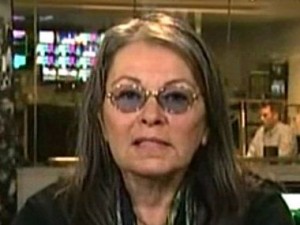 Appearing on RT, Roseanne Barr argued in favor of beheading any wealthy American making over 100 million dollars, and made a case for bringing back the guillotine in American society as a form of justice for big banks and Wall Street.

Previously, while she was participating in the Occupy Wall Street protests, she said that if corporations were people (as decided by the Citizens United Supreme Court ruling), then Goldman Sachs should be executed for financial crimes against the American people. Today she stuck by those comments, and insisted that “the guilty must be punished” and Americans are seeing “their leaders get away with murder.”

Then, in a move Robespierre would have applauded, Barr called for the return of the guillotine in the United States, but added it would only be used on “the worst of the worst of the guilty.” She explained how this incredibly medieval process would work:

“I first would allow the guilty bankers to pay… back anything over 100 million in personal wealth because I believe in a maximum wage of 100 million dollars and if they’re unable to live on that amount then they should go to the reeducation camps, and if that doesn’t help, then be beheaded.”

I should point out here that the host of the show doesn’t raise objections to any of this. And before you ask, Roseanne’s personal net worth is under $100 million. But I mean, seriously? The guillotine? Either I’m missing something or Roseanne just made a liberal argument for the death penalty.

Watch the video below, courtesy of RT: