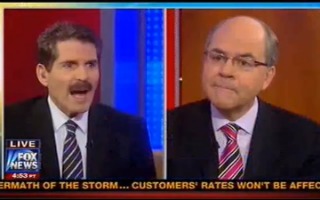 Everyone else on the curvy couch, Stossel explained, basically paid for the new basement on his beachfront property. “You paid for a new basement there, thank you,” he said. “I never invited you there. But you paid for it anyway. It went out again; you paid again. The whole house went; you covered the house. This is a program that encourages relatively affluent people to build in danger.”

“Well, what’s the evidence on that, John?” asked Johnson. “You love dumping on this program. There’s a lot of people helped by this program.”

“No, wait a second,” he continued, as Stossel attempted to speak over him. “…That are not on the beach, that are not on river fronts, that are blocks in, that never anticipated that the ocean would come, that the bay would come. They paid their premiums. They’re not rich people like you were. if you’re so rich, why don’t you give the money back?”

“Ok, so you take Medicare, tight?” asked Johnson. “You take deductions on your taxes. […] The point is, you’re condemning people that are taking this that have paid their premiums that are not rich folks!”

“Why was the federal government selling it?” Stossel asked. “I blame the politicians. We don’t have special car insurance for Lindsay Lohan. The people four blocks in don’t get–”

“So the people who paid the premium, should they not take the money?” asked Johnson.

“The problem is,” said Steve Doocy, “and Peter was talking about this earlier — we’re talking about the FEMA program that insures people in areas that would get flooded out — if there wasn’t that kind of insurance–”

“—There would be private insurance,” Stossel said.

“You think government doesn’t have a role in anything, right?” Johnson asked him.

“No,” said Stossel. “They have a role in keeping us safe.”