The Five’s Beckel Confirms: Reporters Sleep with Sources ‘All the Time’ 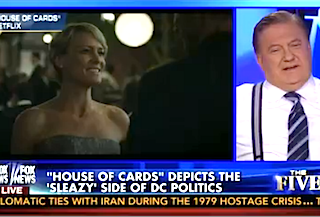 House of Cards star Robin Wright made waves in Washington this week when she claimed she had it on good authority from an unnamed Obama Administration official that reporters really do sleep with their Capitol Hill sources, just as characters in the hit Netflix drama do on screen. According to The Five’s Bob Beckel, it “happens all the time.”

When Eric Bolling brought up the story on Thursday’s show, he first turned to Dana Perino, who previously served as President George W. Bush’s press secretary. She said she first thought “that never happens” when she heard Wright’s quote, but was shocked to find out from some of her D.C. friends that it is quite common.

Bolling assumed it would be female reporters sleeping with male members of Congress as it happens on the show and not the inverse, but Beckel set him straight. “Are you kidding me?” he said. “I was in Washington for 30 years. I don’t have to guess. I can tell you specifically.”

As for Greg Gutfeld, he prefers not to think about it. “I would rather not envision people in D.C. having sex,” he said. “The thought of David Gergen sleeping with Nancy Pelosi could end sex as a concept forever.”