This Exists: U.S. Marines In Afghanistan Ordered Not To Fart Audibly 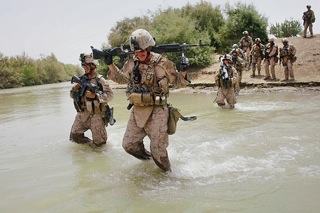 In order for the nation-building operation in Afghanistan to be successful, most of those involved in the operation can agree that American soldiers on the ground need to express the maximum possible respect for the people and culture of the land, as Taliban sympathizers argue the U.S. forces are occupying without being welcome. This seems to be a bit of a stretch of that philosophy, however: Marines there have been told not to “fart audibly” in front of Afghans.

The Military Times reports that this order was reported recently, as some Afghans had expressed dismay at being exposed to such behavior:

So here’s the news: audible farting has been banned for some Marines downrange because it offends the Afghans.

I know there are many things in the Afghan culture that don’t seem normal to Americans and it’s hard to spend seven months working in someone else’s back yard. Still, the Marines I saw downrange are doing a pretty good job at trying to do the right thing around the Afghans.

They’re not supposed to cuss because it could be misunderstood (that one goes out the window a lot). And they stay away from talking about politics, religion or girls because those topics could escalate into major disagreements (they can’t communicate anyway because of the language barrier).

But farting? That’s practically a sport. Ok, it’s not soccer, but a good contest could open the door for cross-cultural exchanges, jokes and other gallows humor.

While the Times seem to put emphasis on the fact that it seems like some sort of extreme limitation of the Marines’ freedom to ask them to stop farting, for this civilian the more interesting part of this discussion is the claim that it “offends the Afghans.” Does it somehow not offend Americans? Obviously there is a difference between civilian and military culture, but it’s a bit hard to imagine that American civilians would react any more positively to foreign troops entering their country and farting loudly all over the place. And then there’s the timing– did it take a decade of war and rebuilding for the American military to figure this one out, or is it just the new crews going into the country that have made this a problem? As the report doesn’t elaborate, we’ll have to leave the answers to this questions to the imagination.