Trump Can’t Believe Neil Young Won’t Let Him Use Song: ‘He Loves Me!’ 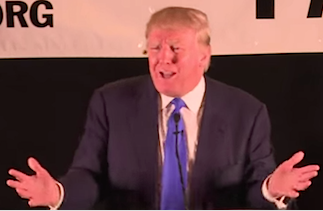 When Donald Trump officially announced his 2016 Republican presidential bid last week he did so to the blaring sound of Neil Young’s 1989 jam “Rockin’ in the Free World.” The next day, Young’s manager informed Trump that his use of the song was “not authorized” and that the singer would be supporting Democratic candidate Bernie Sanders.

This news apparently came as a shock to Trump. As CBS This Morning reported on Wednesday, Trump raised the issue of his right to play Young’s music at a campaign event in Maryland last night, claiming the musician was in his office earlier this month asking for money to fund a new project.

Referring to his use of the song as “background music,” Trump said of Young, “In all fairness, he’s super liberal, I’m the exact opposite.” But at the same time, he was taken aback by the statement from Young’s manager.

“I’m saying to myself, how can this be possible?” he continued. “The guy’s calling me all the time, he loves me… and then, all of a sudden this happens, like, it’s amazing.”

As of this past weekend, Sanders could be seen using the song as his entrance music on the campaign trail.

UPDATE — 5:40 p.m. ET: Trump has now provided via Twitter what he apparently sees as proof that he and Neil Young are actually good friends:

.@Neilyoung A few months ago Neil Young came to my office looking for $$ on an audio deal & called me last week to go to his concert. Wow!

For the nonbeliever, here is a photo of @Neilyoung in my office and his $$ request—total hypocrite. pic.twitter.com/Xm4BJvetIa

And, for the record, Trump wants the world to know he doesn’t love that song he picked for his campaign announcement entrance that much anyway:

.@Neilyoung’s song, “Rockin’ In The Free World” was just one of 10 songs used as background music. Didn’t love it anyway.