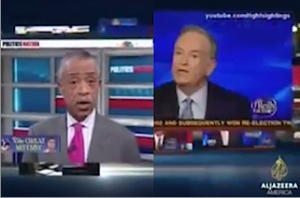 Today’s the day. Al Jazeera America launched in approximately 40 million households at 3pm Eastern with an hour-long promo of sorts telling people what the expect from the network. Within the first five minutes of air time, Al Jazeera America played very brief clips of Fox’s Bill O’Reilly and MSNBC’s Al Sharpton engaged in some of their most contentious onscreen moments followed by a voice saying, “news audiences know what is missing and they know what they want.”

Also visible on screen are clips of Glenn Beck and Rush Limbaugh, along with Piers Morgan’s epically explosive segment with Alex Jones. Seconds later, a woman tells the camera, “I do think that different channels, that the news is slanted in different directions. And I think we have to decide what we want to listen to, what we can assimilate the best.”

As the bold words “A New Choice” appear on the screen, it’s clear that Al Jazeera America is trying to tell viewers that if they want the vicious partisan battles of cable news, they can stick with Fox, MSNBC and even CNN. But if they want something more, this could be the cable news network for them. Former CNN host and current Al Jazeera America anchor Ali Velshi made a similar point to WNYC’s “On The Media” last week when he said the network doesn’t plan to book “guests who take the most extreme views” on issues.”

In addition to stressing the ways in which they are different from their cable news competitors, Al Jazeera America may also be attempting to counter the notion that the channel is “anti-American” in some way, a position staked out by Beck earlier this morning, by including endorsements from Hillary Clinton and John McCain. Within the first five minutes, viewers saw Clinton remark that viewership of Al Jazeera is going up in the United States “because it’s real news” and McCain hail the network for making a “contribution.”

Watch the first 5 minutes of Al Jazeera America below: