A Military Plane Circled Over Manhattan and For a While, No One Knew Why
video

A Military Plane Circled Over Manhattan and For a While, No One Knew Why 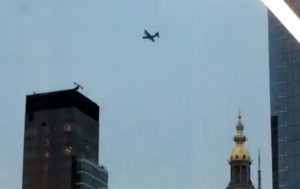 A military plane circled low over Manhattan for several minutes on Wednesday afternoon, and initially, nobody seemed to know why.

Here is a summary of some of the reports about it:

According to Buzzfeed deputy news director Tom Namako, the NYPD could not account for the military aircraft flying low over the city.

The @NYPDnews just told @BuzzFeedNews they don't know why this plane is circling Manhattan. https://t.co/MHL4wktbCH

A video of the plane that's been circling Manhattan pic.twitter.com/Bsj5ANEeW1

Huffington Post social media editor Ethan Klapper has identified the aircraft as an HC-130N, which belongs to the New York National Guard.

And here’s some further clarification from aviation expert Jason Rabinowitz:

The C-130 belongs to the 102nd Rescue Squadron of the New York Air National Guard.

Not normal activity, but it has already departed NYC. https://t.co/y2Jl5lSQAz

People were perplexed as the aircraft circled the sky:

Why is that plane circling Manhattan

A military plane is circling Manhattan.. Makes me extremely uneasy…

Went to an office window not expecting anything but just saw the plane that's circling low over Manhattan, which I don't love…..

That's a weird plane over Manhattan

This plane that's been circling over manhattan is starting to freak me out. pic.twitter.com/L1EcBYOgpr

There's a plane circling above Manhattan. What's going on?

UPDATE 5:40 p.m. ET — The flight was apparently approved by the FAA:

Military C-130 plane above Manhattan is an authorized flight in coordination with air traffic control, per FAA

And here is another video of the plane as it circled over Manhattan.