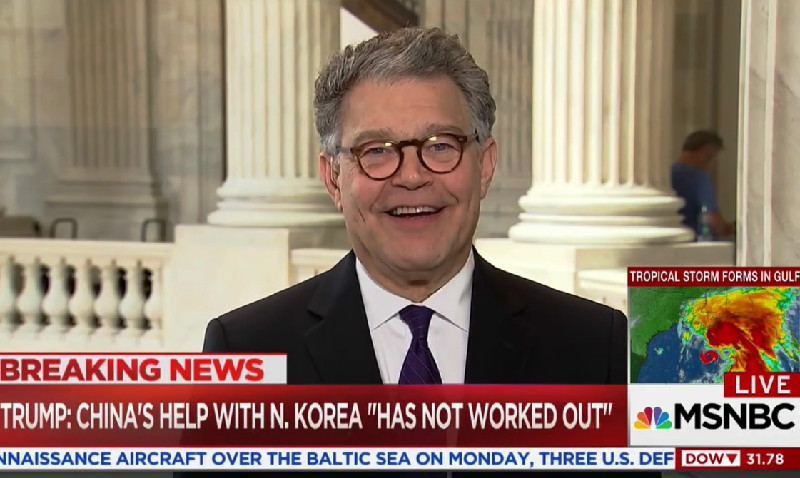 Al Franken is everywhere these days. An interview with the Minnesota Star-Tribune.. An interview with WCCO in Minnesota. A press conference outside his Senate office building. He’s going on what some are calling an “apology tour” and there are two things that are striking about all of these appearances.

The first is he is sticking to the exact same script, saying the exact same things and repeating them over and over again no matter what question is asked by the various reporters he selects to have the opportunity to question him.

The Star-Tribune has a pretty good example of Franken’s memorized script:

“There are some women — and one is too many — who feel that I’ve done something disrespectful, and I’ve hurt them,” he said. “And for that I am tremendously sorry. And I know that I am going to have to be much more conscious in these circumstances, much more careful, much more sensitive. … This will not happen again.”

And he has said a variation (but not too varied) in each of his press appearances.

Since his former life was as an actor it makes sense that he has properly memorized his lines and he is relatively effective at “playing sincere.” Let’s face it, whether you’re an actor, or a politician, if you can learn to fake sincerity, you’ve got it made.

The other striking similarity of all these appearances is that Franken refuses to answer one, simple and reasonable question about his encounter with Leann Tweeden and the several other women that have accused him of publicly groping them and, in Tweeden’s case, forcing himself on her.

From the first day Tweeden revealed her story of Franken forcing himself on her by grabbing the back of her head and forcing his tongue into her mouth during a rehearsal of a sketch on a USO tour, Franken has said that he doesn’t remember the rehearsal in the same way.

This claim leads to a perfectly logical and reasonable question: “If your memory fo the event is different, please tell us what your memory is and how it differs.”

That is exactly what WCCO’s Esme Murphy asked the senator in her exclusive interview with him. Here is his answer:

FRANKEN:  My recollection of that kiss is diff than hers. it is we were rehearsing a sketch where i kiss her… it is really to setup a soldier  coming up to kiss her and… um… my recollection is different than hers.  But, as I said, in this moment it’s important to honor the experience of women. So I apologized to her and I meant it and she was gracious enough to accept my apology. And I thought that was very gracious of her.

MURPHY: Because she said, you know, ‘He put his hand on the back of my neck,  mashed his lips against mine and aggressively stuck his tongue in my mouth.”

FRANKEN: I know. I know that’s what… And I remember it differently. I do.

All he is saying is he remembers it differently.  OK. Well then HOW DOES HE REMEMBER IT?

Here are the specific follow-up questions that should be asked, and would be asked if Franken were a Republican:

Franken is getting the benefit of “apologizing” for something that he still continues to deny he ever did. And he is getting away with it.

By saying he “has a different recollection” of the assault Tweeden describes he is basically saying she is a liar without having to feel the political ramifications of calling a victim a liar (see Lena Dunham.) And… he’s probably going to get away with it.