Trump Confuses Foreign Intel with Diplomacy: 'Should I Call the FBI' on The Queen?

Trump Conflates Foreign Interference with Normal Diplomacy: ‘Should I Call the FBI’ on ‘the Prince of Whales’?

President Donald Trump is defending his recent controversial comments to Good Morning America anchor George Stephanopoulos earlier this week in which he admitted that he would be open to hearing opposition research on political foes provided by foreign governments.

The comments made in a wide-ranging interview has sparked bipartisan condemnation and counters comments made by Trump’s own FBI Director Christopher Wray, who had previously claimed that any candidate offered oppo research by a foreign agent should go to the FBI. “The FBI Director is wrong,” is how the president replied.

Trump defended his comments with a specious hypothetical that, just because he meets with “foreign governments” all the time, should he “call the FBI about these calls and meetings?”

…..call the FBI about these calls and meetings? How ridiculous! I would never be trusted again. With that being said, my full answer is rarely played by the Fake News Media. They purposely leave out the part that matters.

Of course, meeting foreign governments in an official diplomatic setting is remarkably different than receiving opposition intel from foreign agents, which even Fox & Friends host Brian Kilmeade claimed puts an elected official in a compromised position.

Also, unless he has an in with Aquaman’s royal family, Trump is almost certainly referring to the Prince of Wales, not the Prince of “Whales.”

Update! The original tweet appears to have been deleted and replaced with the corrected spelling of Wales. Here is a screenshot of the original: 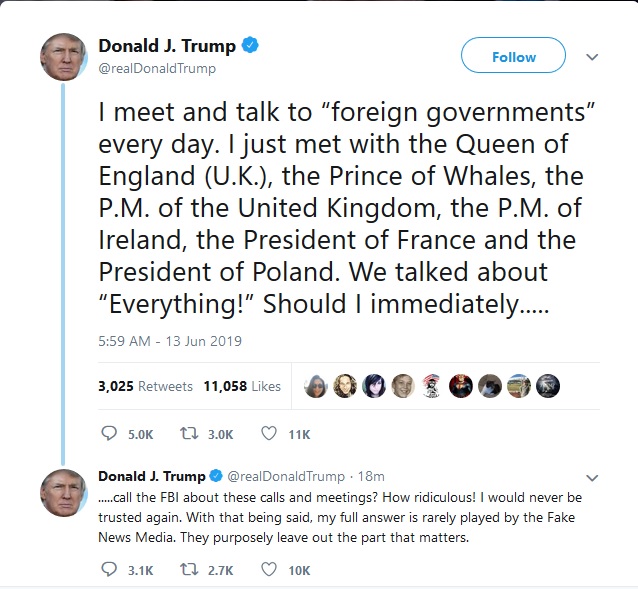