‘I’m Not a Big Fan of Term Limits’: Trump Was Against Term Limits Before He Was For Them 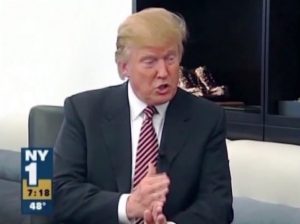 During his rally in Colorado today, Republican presidential nominee Donald Trump said that if he were elected, he would propose a constitutional amendment to limit Congressional terms.

However, just like with abortion and the Iraq War, Trump didn’t always believe in term limits. American Bridge, a pro-Clinton Super PAC run by David Brock, dug up footage of Trump telling NY1 that he was cool with Michael Bloomberg pushing New York City to extend its term limits when he ran for mayor a third time.

In Colorado, @realDonaldTrump called for term limits, but in 2011, he said he was "not a believer." Watch: https://t.co/VGhPsL3RPi

“Well, I’m not a believer in term limits,” Trump told the host. “If you don’t like someone, you push a button.”

The real estate mogul also talke about how great Bloomberg was as a mayor and called him a friend, a position he doesn’t hold today.

“I don’t know why it’s popular,” the GOP candidate continued. “I think it’s people who really press it who want to run for office and the only way they’ll get elected is, I guess, to term limit people out because they can’t win an election.”

Trump finished it up by talking about how big a fan of Bloomberg he is.