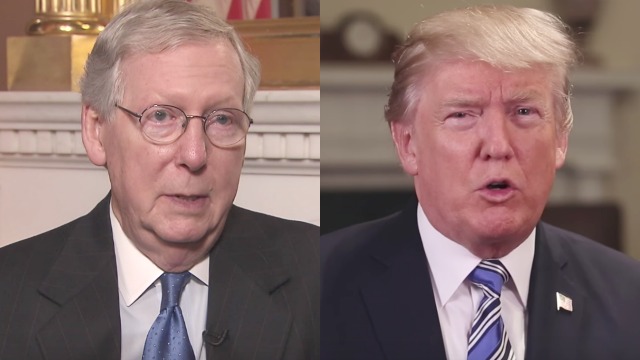 President Donald Trump sent out a pair of Tweets lavishing praise on “our great Kentucky Senator” Mitch McConnell just hours after a new Democratic Senate challenger to McConnell, Amy McGrath, announced her run and drew tens of thousands of likes on Twitter.

Trump warned his followers that “Democrats are coming after” the Senate Majority Leader, who routinely touts his ability to help his state by guiding Senate legislation and who acts a steadfast Congressional backstop for Trump now that the Democrats have retaken the House majority. Trump also referenced comments by McGrath, a former Marine fighter pilot, that her emotional response to Trump’s 2016 election was similar to the “the feeling I had after 9/11,” which she says many Republicans, including the president in his Tweet, have misrepresented and taken out of context.

Democrats are coming after our great Kentucky Senator, Mitch McConnell, with someone who compared my election to September 11th….

….Why would Kentucky ever think of giving up the most powerful position in Congress, the Senate Majority Leader, for a freshman Senator with little power in what will hopefully be the minority party. We need Mitch in the Senate to Keep America Great!!

In the first day after announcing her run, McGrath garnered AOC levels of appreciation on the president’s favorite social media platform. Her 2020 Senate run comes on the heels of her defeat in a Kentucky House race last November.

When I was 13 years old, I wrote my Senator—I wanted to be a fighter pilot, but women weren’t allowed to do that. Mitch McConnell never wrote back, and I know I’m not the only Kentuckian he’s ignored in his years in Washington. Let’s defeat him together: https://t.co/Zuvl99alrk