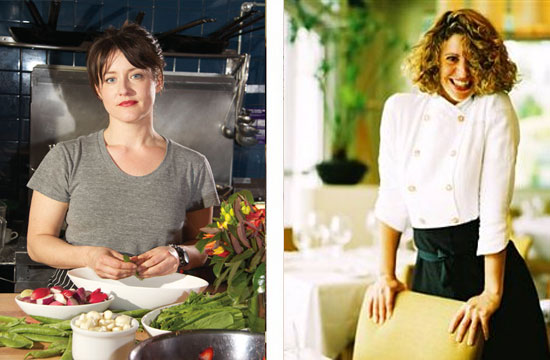 Why aren’t there more great female chefs? The answers are many, but food writer Charlotte Druckman thinks that much of it has to do with the macho nature of the kitchen, and how women don’t feel like they have a place at the head of it. (In fact, she just wrote a book about it!) In an interview with NPR, however, Druckman relayed two case studies of successful women chefs, particularly their management styles.

On the one hand, there’s BEAST’s Naomi Pomeroy, a self-taught chef who surrounded herself with professionals when she opened her own restaurant. But while she’s collected accolades for her food and ended up on Top Chef Masters, interestingly enough, she does not call herself a chef:

If you asked her what she did for a living, she would know that she is a chef. She is the head of her kitchen. She cooks in her restaurant. But she has a hard time with the title, which happened a lot with these women. And I think that when you’ve got a profession that has been so unwelcoming for so long then you start to associate the term with that kind of chauvinism and you feel reluctant or uncomfortable accepting that title.

On the other hand, it’s a double-edged sword, especially for women, because if you say you’re a chef and you’re a woman, people already presume you mean that you’re a home cook anyway. So if you use the word cook instead of chef, then no one’s ever going to think that you are in charge of a restaurant kitchen or that you own a restaurant.

On the other other hand, however, there’s classically-trained Michelle Bernstein of Michy’s, who ended up adopting a more old-school method of being a chef:

I think Michelle Bernstein had the experience that Naomi didn’t have. So Michelle has a much more traditional – I was going to say, upbringing – in the professional culinary industry and having been in all of those very male, very traditional kitchens, got to her…

It’s set up traditionally as it was in France. It’s set up the same way a barrack would be, so it follows the army method. So it really is hierarchical and tough and, yes, male. And you also find a lot of chefs who really do things like throw hot pans around and scream at people. And Michelle felt that she had to repeat that because it was the only way to show that she had chops and that, in a way, she wasn’t just a girl.

But what Druckman can say emphatically is that Rachael Ray is most certainly not a chef, nor should people call her one. “She doesn’t have that experience of having gone through the ranks and slogged through the trenches and then become a leader in that space,” she explained. “She deserves so much respect for the success she’s had as a businesswoman and as a brander of herself and of content but to say that that is a chef, I think, does quite a disservice to those people who are in fact actually chefs.”