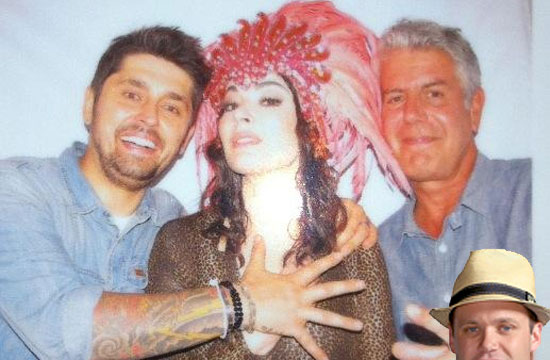 We’ve been getting some news from the set of The Taste, Anthony Bourdain and Nigella Lawson’s experiment in bossiness, for a few days now — but now that there’s a super official-looking press release on Eater, we have learned the following:

While this format sounds horribly derivative of many other cooking shows out there, there is one saving grace: the judges are the most mentally deranged, borderline, weird, and possibly narcissistic (well, Malarkey, anyways) collection of cooking personalities that have all been placed in one TV studio. Because while we all know that Joe Bastianich and Gordon Ramsay are good at the “scathing rage” thing, they’re really not as prominent for their ability to inspire confused foodie arousal as the three of these judges are — as in, “Why are you yelling at me? Why are you so mad? Why is it that your talk of foie gras makes me feel uncomfortable in the groin region? Especially you, Nigella?!”

(We have no idea what to make of Malarkey and his hat, other than as a thing that Joe Biden says now and again. Season Three of Top Chef was ages ago. Shh.)

The show premieres on ABC sometime in 2013. Ugh, waiting.