Congressional GOP Reportedly Looking to Cut Weekly Unemployment Bonus From $600 to $100, Sparking Outrage: ‘They Just Don’t Give a Sh*t’ 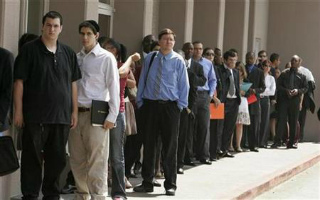 The Congressional Republicans’ plan to cut the coronavirus-crisis weekly unemployment bonus from $600 to $100 elicited howls of outrage and derision on Wednesday.

The weekly bonus, part of a financial relief package aimed at mitigating the unprecedented spike in jobless numbers due to the nationwide shutdown, is due to expire at the end of July. Many Republicans, like Sen. Lindsey Graham, have virulently opposed extending the bonus because some of the unemployed have temporarily earned more than at their previous jobs due to the extra money. Democrats, by contrast, have pledged to hold the bonus steady, pointing to the rollback of many state business reopening as the Covid-19 virus has surged again in recent weeks.

The anger over the proposed cut, reported by CNBC, was raw and deep, as many mocked the GOP counter-proposal as woefully inadequate.

Democrats should hold steady at $600 per week. Trump’s covid response has been a disaster. We can’t compound that by cutting benefits to people who have no other options or giving corporations blanket liability waivers to force workers back into unsafe jobs. Pick this fight. https://t.co/9m8ht6Koa1

Notice the time frame: reported proposal is to reduce federal enhanced unemployment benefits to $400/MONTH, which until now have been $600/WEEK https://t.co/fVcO22yb3T

Sources close to Mitch McConnell inform me that the Senate Republicans COVID relief bill will replace the $600 in enhanced unemployment payments with a coupon worth up to 20% percent off any appetizer at Denny’s.

Republicans want to slash the unemployment insurance payment from $600 per WEEK to $400 per MONTH. Just a total joke. https://t.co/1EhMnJWAsg

Never seen a party work so hard to kill its constituents. That a single Republican will survive this election is a testament to the power of Fox News and right-wing media. https://t.co/lqbsNKe3VQ

This would be catastrophic. https://t.co/PHczWPL8tq

They’re not out of touch, they know this is nothing. They just don’t give a shit about people. https://t.co/NFDFfszBCR

This would lower the Federal Pandemic Unemployment Compensation weekly benefit from $600 to $100.

Given the pandemic + double digit unemployment this is, uh, batshit crazy. https://t.co/lr7SHrQCsI

Holy fucking shit are you fucking kidding me https://t.co/7X2MvDggJG

This reflects the sudden concern about the deficit that their tax cut bill created. They weren’t concerned about the deficit at all until Congress started talking about actually helping people who need it. https://t.co/t0BTnuOtlW