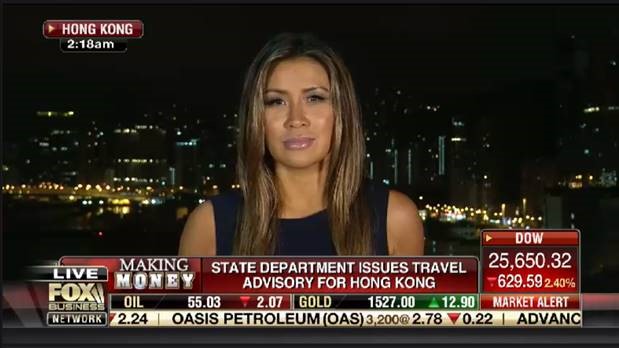 For many in the United States, what’s going on in Hong Kong seems worlds away. But that isn’t the case — what’s happening in Hong Kong is directly impacting the American economy.

Mediaite spoke with Fox Business correspondent Susan Li about her experience as a journalist covering the mass protests in Hong Kong, and how the situation there will affect the U.S.

What is something Americans would be surprised to learn about Hong Kong and the way in which the situation there is impacting the lives of Americans?

I think Americans may be surprised how much Hong Kong protestors say they love America! They’ve been waving the American flag and singing the American national anthem. The protestors see the US flag and anthem as symbols of freedom and democracy and they want the same rights to vote for their leadership and free speech/assembly. When they see I work for Fox News / Fox Business — I’ve been told by protestors that they love Fox News because it represents America.

What’s the juxtaposition between life in Hong Kong and mainland China? And how does that compare to life in the US?

Hong Kong is much more like an American city than most other cities in Mainland China. That’s because Hong Kong flourished under British Rule for over 130 years before being handed back to China in 1997.  Hong Kong’s legal system (commonwealth based on fair trial with evidence in front of judges and juries), business transparency (corporate rules that require clear information disclosure by companies) and rights to elect representatives. That is in many ways — fairly similar to US life and freedoms as opposed to China where one judge decides cases without due process, opacity and lack of disclosures in business and most obviously — no right to vote for government officials.

Are there any visible signs of the ongoing trade war between the US and China in Hong Kong?

Hong Kong is home to a lot of companies in the import/export trade. Meaning they buy from China to SELL to the US. These companies have greatly benefited from the middle man positioning for decades and in this trade war have found it more difficult to sell to the US. Also dynamic changes with Chinese companies now selling goods for themselves with China’s development has also hurt.

We see in news reports out of Hong Kong, lots of demonstrators waving American flags. Has there been any impact on the demonstrators from President Trump’s views on and relations with China?

Protestors I speak to say they want the US to have more conviction and they want President Trump to talk tougher to Beijing to help them in these protests. The protestors complain the Chinese Communist Party is an evil authoritarian regime and they need America’s help in fighting Beijing.

Talk a little bit about what it’s like being an American journalist in Hong Kong at this specific time? What restrictions do you find? What differences are there between covering stories in the US vs Hong Kong and China?

There is press freedom here in Hong Kong as opposed to China where everything is watched. For instance — every international channel that broadcasts out of Beijing has to send their signals through one satellite connection that Beijing controls. Every journalist that has ever worked in China expects that any criticism or any reporting that reflects negatively on Beijing will be CUT off. Meaning China hits the off switch! You are also always tracked in China and have to get permission to film anything. That’s not the case in Hong Kong!

There are 3 possible outcomes: 1) Give in to the protestors demands (highly unlikely) 2) China declares Martial law (very small possibility but still seen as remote) or they get rid of the Hong Kong Chief Executive Carrie Lam and start jailing the protest leaders which experts say will go to slowly ending these protests.

I see the comparisons because both were student-led movements demanding more freedom and democracy but we live in a different age in 2019 with 24 hour news channels and social media. Beijing already has what they want anyways which is the ability to control the Hong Kong government, keep the capital market taps flowing while extracting any citizens they want. And they do this all behind the scenes — rolling in the tanks now would be a very bad look and not only hurt Beijing’s reputation on the world stage but also crater the financial markets/economy at a time when their economy is slowing down.

What is the media environment like in Hong Kong. What freedoms do journalists enjoy there that they don’t in mainland China?

The media have much more latitude in Hong Kong than they do in China. In China — you are forced to hire Beijing provided drivers and translators (basically people who report back to the Chinese Government on your sources, movements and stories you are working on) whereas in Hong Kong you are not monitored. You are free to travel to wherever you like in Hong Kong but in China — you have to always apply for a permit to travel to places to cover an event. In China — all broadcasters have their global satellite links beamed out through 1 signal that’s controlled by the Chinese government and if they see something that they don’t like or something they feel is negative about China — your broadcast feed is then blacked out. That is NOT the case in Hong Kong where there is full press freedom to write and tell the stories you feel are worthy of your audience.

In what light do the protestors view journalists? Do they see them as objective reporters? Supporters of a free press? Or the governments voice from Beijing?

It’s been really interesting covering these Hong Kong protests for Fox News and Fox Business — because we’ve had those taking part in these pro-democracy rallies come up to us to say they “love Fox” because Fox represents America and the Hong Kong protestors want what Americans have! That is — the right to vote for their leadership, the right to free speech, free assembly and due process. And they have thanked us for getting their message out to the biggest international audience in America! The protestors believes in the objectivity of the press — but they fear Beijing is trying to cloud that message and twist it to their own propaganda use. Beijing wants to convey the message that protestors are vigilante thugs who are being helped by international governments like US intelligence who are threatened by a rising China.

Talk a little bit about how what’s going on in Hong Kong is contributing to the volatility of the stock market?

Hong Kong’s stock market has fallen by double digits since the protests began back in June but Hong Kong doesn’t have the influence New York does. The protests have hurt investor sentiment by threatening to take China’s attention away from signing a US China Trade deal especially if it the protests turns violent and it would be a bad look for President Trump to negotiate with a government that would crack down on its own people. The Hong Kong protests are also adding to China’s economic slowdown — with the Hong Kong economy hurt by the disruptions at the airport, businesses moving staff elsewhere as a safety precaution and tourism down. Hong Kong has been positioned as the international investor gateway to China where foreign investors could invest money into the Chinese economy and buy Chinese company stock. But because of Shanghai’s development and growth over the past decade — Hong Kong represents MUCH less of the investor dollars these days. Near the start of the 2000s — financial experts say Hong Kong accounted for nearly a quarter of the investment flow to China but now it represents single digit percentages with investors directly investing into China itself bypassing Hong Kong.

Hong Kong protestors see the US and Trump as their international ally to fend off Beijing. Over and over again — we’ve heard from young protestors and even Hong Kong’s current and former lawmakers press the US congress to pass the Human Rights Act to protect Hong Kong if Beijing turns to military intervention. We’ve had Hong Kong politicians and protest supporters travel to America to lobby US politicians on both sides of the aisle to help them in their fight. And they want President Trump to be tougher with China and President Xi.