Tucker Carlson Rages at Whitmer’s ‘Arbitrary Fascism’ for Allowing Weed Sales During Pandemic: ‘Fire Up a Bowl and Accept Your Fate!’

Things were the very opposite of mellow on Tucker Carlson Tonight on Thursday night.

That’s because the eponymous host unleashed an unhinged rant against Michigan Democratic Gov. Gretchen Whitmer, beginning with a slam against her “arbitrary fascism” for allowing marijuana and liquor sales during the state’s coronavirus lockdown and ending with a surreal and rage-filled impersonation of Whitmer demanding her citizens get high and obey her jackbooted authority.

The Fox News host was clearly incensed by Whitmer’s condemnation of a Wednesday protest in the state capital by people fed up with her shelter-in-place decrees and decisions over which public and commercial activities are deemed “essential.” The protests, dubbed “Operation Gridlock,” began as a car-based siege but many soon took to the streets and swarmed the capitol building, clearly not abiding by social distancing rules.

“Gretchen Whitmer has spent most of her working life and the grubby smallbore confines of Michigan state politics. It’s not a training ground for excellence. When she was elected governor a little over a year and half ago, no one expected Whitmer to morph into a wise and inspired chief executive. And she hasn’t,” Carlson said, wasting no time in tearing into the governor at the start of his segment.

“When the coronavirus hit, she had no clue what you so she responded with a mixture of comical ineptitude and a weird kind of arbitrary fascism,” he claimed, calling out some of the items her administration both prohibited and allowed to be sold under the Cover-19 restrictions. “She banned the sale of carpets and paint and potted plants. She told people they couldn’t fishing or go to church or drive alone to their own homes. But at the same time, Whitmer kept liquor stores, weed shops, and lotto kiosks open because, and this was purely an epidemiological matter, in the interest of public health, those were ‘essential services,’ quote. They also happen to provide massive tax revenue to her government. The whole thing was ridiculous.”

Accompanying Carlson’s comments above was a none-too-subtle “Can Buy” graphic showing a marijuana leaf, lottery tickets, and something that was labeled as “liquor” but looked unmistakably like beer. 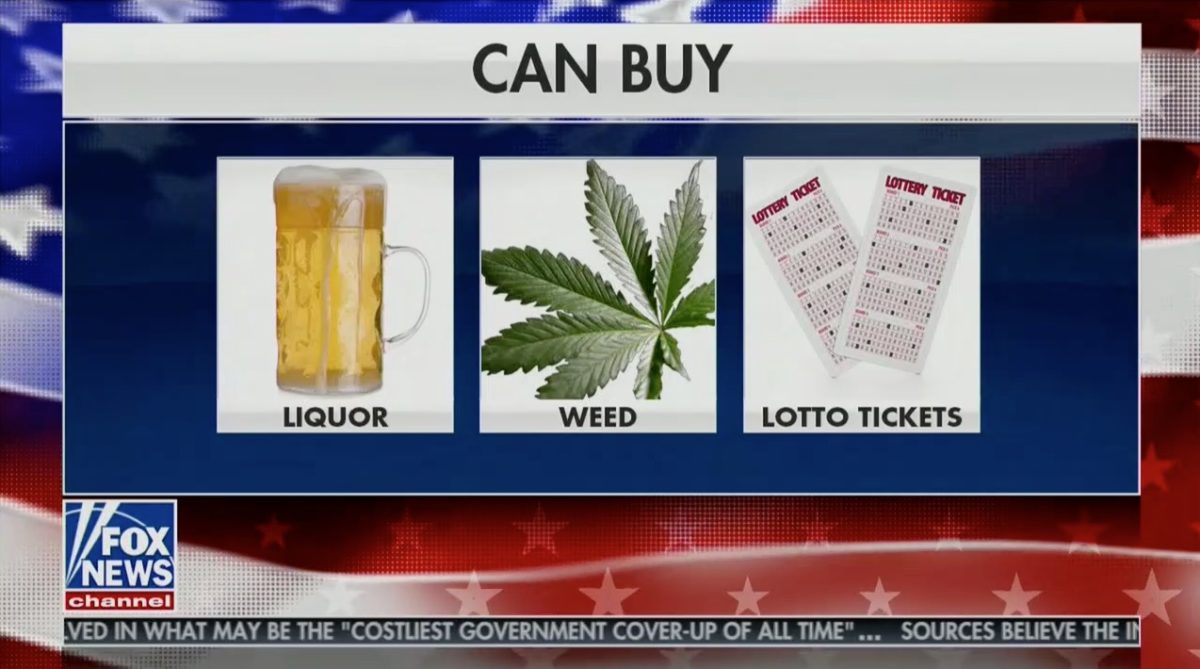 Carlson expressed sympathy for the protestors, saying the onset of their frustration was “only a matter of time.” After a clip where Whitmer called out the protestors for possibly spreading the virus by congregating so closely together — some were seen handing out candy to children bare-handed — Carlson equated her comments to a dictator trying to suppress dissent.

“They didn’t hurt anyone while they were there. They did it peacefully, as is their enshrined right in the Constitution,” Carlson said, ignoring the many examples of not abiding by social distancing guidelines enacted to prevent Covid-19 community transmission. “When you disagree with Gretchen Whitmer, you endanger the public. That’s the new standard in Michigan.”

He trained his sights on Michigan Democratic Rep. Debbie Dingell, who also criticized the protestors for failing to wear gloves or masks and completely blocking the road leading to a local hospital.

“What happened yesterday was inexcusable,” Dingell said. “These people did not have masks. They didn’t have gloves. They didn’t distance themselves. They had Confederate flags, swastikas. They blocked ambulances trying to get to a hospital. Hate and fear into a time that’s already full of fear and anxiety. It’s not acceptable. There were people bare-handed handing candy to children. What they did was help spread this disease around the state more, most likely, not contribute into the mitigation. And it just made me sad.”

“Oh, sad. Debbie Dingell is sad,” Carlson said, his sarcasm not merely dripping but gushing as he clearly misinterpreted her remarks. “She is sad the people are expressing inconvenient political beliefs when they should be drinking alone at home or obediently buying more state-sponsored lotto tickets.”

“Why can’t they hit Michigan’s entirely essential weed stores and numb out as their benevolent leader Gretchen solidifies her control over their lives,” Carson added, the bile in his comments now nearly bubbling over.

“Why do they have to complain all the time? Saying unapproved things is racist! It inspires fear and hate,” Carlson raged on, impersonating a supposedly tyrannical Whitmer, before delivering a scowling, spleen-venting conclusion to a truly bizarre four minutes of cable news.

“Stop it right now you proles! How dare you! Fire up a bowl and accept your fate!”