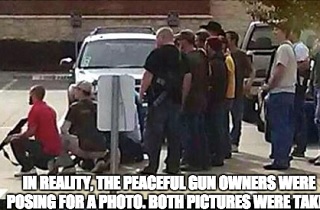 Fresh from the success of cancelling the Million Armed Man March in Washington, DC, gun advocates in Texas found a more appropriate target than a large metropolitan police force: four moms having lunch. Forty armed members of Open Carry Texas (not affiliated with the month of October) staked out the parking lot outside the Dallas Blue Mesa Grill, where four Gyno-Americans were holed up plotting the downfall of the Second Amendment, which the Founding Fathers clearly intended as a bulwark against the Hounding Mothers. This may sound like overkill, but you never know when one of those chicks is going to drop a Porsche on you.

ThinkProgress was first to highlight the incident, which pitted the four members of Moms Demand Action against forty members of Open Carry Texas:

According to a spokeswoman for Moms Demand Action (MDA), the moms were inside the Blue Mesa Grill when members of Open Carry Texas (OCT) — an open carry advocacy group — “pull[ed] up in the parking lot and start[ed] getting guns out of their trunks.” The group then waited in the parking lot for the four MDA members to come out. The spokeswoman said that the restaurant manager did not want to call 911, for fear of “inciting a riot” and waited for the gun advocates to leave. The group moved to a nearby Hooters after approximately two hours.

MDA later released a statement calling OCT “gun bullies” who “disagree[d] with our goal of changing America’s gun laws and policies to protect our children and families.” The statement added that the members and restaurant customers were “terrified by what appeared to be an armed ambush.” A member of OCT responded by tweeting, “I guess I’m a #gunbullies #Comeandtakeit.”

According to USA Today, however, the restaurant manager did call the police:

“We are aware that a group did gather in a shopping area in Arlington Saturday,” Tiara Ellis Richard of the Arlington Police office of communication said in an e-mail to USA TODAY. “Officers were notified and arrived at the location. There were no issues that we are aware of, and no arrests occurred.”

…Chris Barton, the CFO of Blue Mesa Grill, said that the manager called 911 at 11:35 a.m., shortly after the armed group arrived.

“When the manager called, he told them (the police dispatcher) what was going on,” Barton said. “They said that if they are having a peaceful demonstration, they are within their legal rights.”

He said the police did arrive as the group was leaving the restaurant area to walk to a nearby Hooters.

The open carry group insists that it wasn’t trying to intimidate the moms, but simply to peacefully assemble with assault weapons. They also pointed out that while the mainstream media will focus on photos like this one of the group posing for a photo, they want the world to know that they were posing for a photo. Besides repeatedly explaining that their mission is simply to “condition Texans to feel safe around law-abiding citizens that choose to carry them,” Open Carry Texas has also divined MDA’s true raison d’etre: maybe they kinda sorta want to get “raped” by OCT:

Things that make you say, Hmmmmm

Yes, or things that make you say “Hmmmmm” after you’re done throwing up. That’s an official Open Carry Texas Facebook post. Here’s a screenshot, in case they decide to take it down: 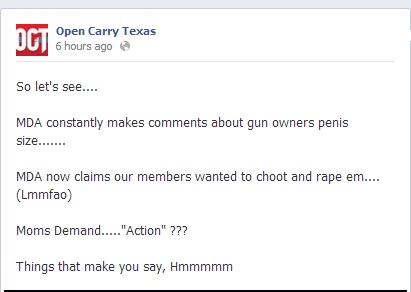 Moms Demand Action are no strangers to this sort of peaceful non-intimidation. In March, a smaller group of armed counter-protesters showed up at the State House in Indianapolis to not intimidate an MDA chapter. Open Carry Texas also posted this challenge to Moms Demand Action’s Shannon Watts:

“Hey Moms Demand Action for Gun Sense in America, here’s your chance to get your ideas out in public,” Open Carry Texas wrote on its Facebook page. “The president of Open Carry Texas, CJ Grisham, is issuing an open invite and challenge to MDA President Shannon Watts to debate the issue of ‘gun sense’ (gun control) versus gun rights (supporting the Constitution). Since we are issuing the challenge, Shannon may pick anywhere in the State of Texas to hold the event and OCT will pay for the venue.

“We will also accept the Texas Chapter President of MDA if Shannon doesn’t feel intelligent or confident enough to handle an open debate. OCT will NOT be open carry at the event so MDA can feel safe and secure in its ignorance and false sense of safety. Shannon may email her response CJ directly from her official email to cj@opencarrytexas.org. The ball is in your court,”

No word on whether OCT would open-carry their penises to the event.

Finally, we’ll also have to hold our breath waiting for Sarah Palin to denounce this OCT post: