A Running List of Lawmakers Calling for Eric Shinseki’s Resignation

A Running List of Lawmakers Calling for Eric Shinseki’s Resignation 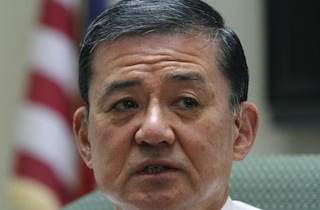 President Barack Obama was expected by many to fire Shinseki in a one-on-one meeting at the White House last week; instead, Obama retained the general, who has served in the post since the start of the Obama administration.

However, a bipartisan report on the depth of the wait time problems at the Phoenix VA hospital, where the scandal started, has intensified pressure on Shinseki to go. Democrats, many of them seeking reelection in vulnerable districts, and Arizona lawmakers in particular, have been vocal about their desire for a change in leadership. Meanwhile, other lawmakers, including most congressional leaders, have expressed concern about the report, but not called for Shinseki’s resignation.

Shinseki wrote an op-ed in this morning’s USA Today calling the report’s findings “reprehensible” and vowing to restore integrity to the department.

Mediaite will update this post if and when more lawmakers publicly call for Shinseki to resign.