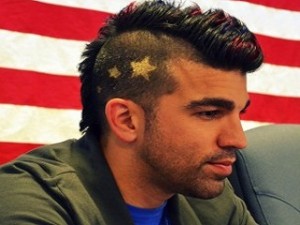 Science has been fraught with unintended consequences, and the Mars Curiosity rover landing is no different. In fact, it turns out that the rover has helped the Internet discover a new star: Bobak Ferdowsi.

The Flight Director on the Mars Science Laboratory Curiosity mission celebrated with his comrades the moment Curiosity touched ground, but the real surprise came when he checked his phone hours later to find hundreds of emails and Facebook friend requests.

It turns out that Ferdowsi’s colorful and star-studded Mohawk ‘do has attracted its own following. Since footage of Ferdowsi’s Mohawk appeared on TV and the Web, the Flight Director has become a Twitter trend, a meme, and the object of Tumblr affection. His own Twitter account has jumped from 200 to more than 33,000 followers overnight, revealing the starpower Ferdowsi’s Mohawk has granted him.

According to Ferdowsi, the NASA team in charge of the Curiosity mission had voted on the theme and colors for Ferdowsi’s hair in an attempt for them to de-stress. The team has apparently made the vote a tradition whenever a big event is about to happen on the project.

So what does Ferdowsi think about all the hype?

“If my mohawk gets a few more people excited about science and this mission, that’s awesome,” Ferdowsi said. “That’s what it’s all about.”

Ferdowsi is set to remain as Flight Director for the mission, meaning that this may not be the last time we see NASA’s Mohawk Guy trending all over the Internet.