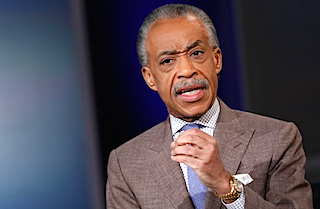 In response to the whitest Oscar nominations in 17 years, Al Sharpton has issued a statement expressing his disappointment in the nominations and calling for a meeting to address the lack of diversity in Hollywood.

“The lack of diversity in today’s Oscar nominations is appalling, and while it is good that Selma was nominated for ‘Best Picture,’ it’s ironic that they nominated a story about the racial shutout around voting while there is a racial shutout around the Oscar nominations,” Sharpton said in a statement. “With all of the talent in Selma and other Black movies this year, it is hard to believe that we have less diversity in the nominations today than in recent history.”

Repeating a line he delivered to a TMZ reporter last month, Sharpton added, “The movie industry is like the Rocky Mountains, the higher you get, the whiter it gets.”

Sharpton also said he has called an “emergency meeting” with his task force in Hollywood early next week “to discuss possible action around the Academy Awards.”

The MSNBC host and head of the National Action Network convened similar meetings in December to address racially-charged comments made by Sony Pictures head Amy Pascal and producer Scott Rudin in leaked emails.

In an interview with the New York Daily News, Sharpton invoked the killings of Michael Brown and Eric Garner to emphasize why he felt the lack of nominations for black actors was so outrageous.

“In the time of Staten Island and Ferguson, to have one of the most shutout Oscar nights in recent memory is something that is incongruous,” he said. “The only category we’re well represented is in the best picture nomination and it’s a movie about blacks being shut out of society. And now we’re shut out of Hollywood.”

Selma received nominations for Best Picture and Best Original Song, but director Ava DuVernay and actor David Oyelowo were both snubbed by the Academy.