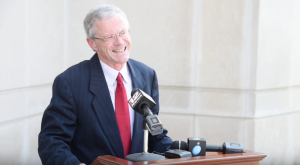 Last week, after initially being denied the right to have an abortion by a local district attorney, a pregnant, 12-year-old rape victim was granted judicial bypass by the Alabama Civil Court of Appeals. The unnamed adolescent girl is not in contact with her father and has an abusive mother who reacted violently to her daughter’s pregnancy.

Now, Win Johnson, the conservative legal director for the Administrative Office of Courts under former Chief Justice Roy Moore, is speaking out to attack the Alabama Civil Court of Appeals and even the 12 year old. One thing anti-abortion activists can certainly boast about is the indiscriminate nature of their advocacy — whether the individual seeking an abortion is a promiscuous adult or an adolescent rape victim, they’ll be just as cruel.

“[The ruling said the victim] was mature enough — and I’m going to put this in its starkest terms — to decide to murder her own child in her womb,” Johnson said at a Wednesday news conference. As if the child hasn’t been through enough, now she has to be defamed and accused of murder.

“She probably has trouble deciding what shirt to wear to school,” Lorie Mullins, executive director of COPE Pregnancy Center in Montgomery, added. “The courts, the law has decided that she’s not old enough, wise enough and mature enough to make her own decision about whether or not she wants to drink, to buy a pack of cigarettes to drive a car.”

It’s puzzling that Mullins and Johnson seem to think the same 12-year-old not mature enough to make a choice about her body would be mature enough to experience nine months of pregnancy and give birth. In either case, there’s an eerie connection between the girl being stripped of her bodily agency by her rapist, and now having to watch her bodily agency once again be attacked by conservative leaders.

“I don’t know what the perfect answer is, but I know this is not it,” Mullins concluded. “If I could actually speak to this child, the only thing I could say to her is you’ve been robbed of your childhood. Don’t rob yourself of your future.”

It should go without saying that telling a likely traumatized, 12-year-old victim of rape that opting to not become a mother while still, herself, a child would be to “rob [herself] of [her] future” is a disturbing opinion to have, let alone to express. It’s frankly horrifying that Johnson and Mullins were given a platform, at all, to spew their manipulative, harmful rhetoric.

Here’s to hoping the poor 12 year old never has to be exposed to this awful, emotionally abusive tirade.