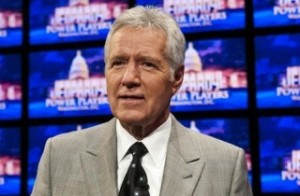 The Sony hack has touched all corners of the entertainment industry (and some in the political world, too) — and, apparently, it has not spared Jeopardy! host Alex Trebek, revealing that he recently threatened to quit over a stage mother’s tantrum.

It all began when a contestant on Jeopardy! Kids ran off the stage in tears after Trebek informed her that she would not be able to participate in Final Jeopardy due to her negative score. But although the girl eventually calmed down, her mother was furious at how Trebek allegedly treated her darling dear daughter, and fired off an angry email to the show’s producers, obtained by Radar Online:

According to the mom, Trebek didn’t ever console the girl backstage. “If he had taken the time, he would have known, like you do, that my daughter is not a sore loser, and does not become emotional solely over losing a game,” the woman wrote. “She was upset about not being able to completely play the game to the end.”

“I don’t think I’ll ever forgive him for that,” the girl’s mom wrote in a letter to Jeopardy! producers.

(While he probably didn’t comfort her backstage, Trebek barely has time to talk to the contestants after each taping and has to run backstage to put on another suit. Fun fact, from your resident Jeopardy! nerd.)

The producers promised to retape the segment, adding that while “Alex’s intentions were good,” the mother could cause some bad publicity and “start another feeding frenzy about Alex’s perceived insensitivity.” But Alex, who’s had 30 years to put up with this crap, blew up at the staff:

“If you all think I should retape the opening, I will,” he wrote. “But I want to say that for 30 years I’ve defended our show against attacks inside and out. But it doesn’t seem to operate both ways. When I’m vilified, corporate (and certainly legal) always seems to say ‘don’t say anything and it’ll blow over,’ and I’m not feeling support from the producers, and that disappoints the s—t out of me.”

Trebek’s angry message ended with a threat that he insisted was anything but: “If I’m making mistakes and saying things you don’t like, maybe it’s time for me to move on,” he wrote. “It’s not a threat, but I want to let you know how I’m feeling.”

So far, Trebek has not quit, though rumors of his retirement have followed the 74-year-old in recent years. Serious question: how much more crap can Trebek put up with? Or, to phrase it in the Jeopardy! way: This is the amount of crap Alex Trebek can put up with.