American Hunter Pisses Off the Internet with Photos of Exotic Kills

American Hunter Pisses Off Internet with Photos of Exotic Kills 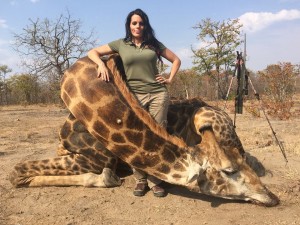 Corgatelli’s trip began a few days before the news of Cecil’s illegal killing at the hands of poachers and American safari hunter Walter Palmer first broke. However, as soon as big game hunting became a trending topic online, she jumped on the bandwagon and littered her Facebook wall with picture after picture of dead animals.

Among the targets bagged were a kudu, a giraffe, a warthog, a blue wildebeest and an impala.

Though it seems like a lot, Corgatelli’s total kills from her trip pale in comparison to the much larger number of exotic animals hunted annually on the African continent by Americans with loads of cash. But what makes her trip different is just how willing she was to troll the Cecil-loving Internet with numerous photos of her game.

By Friday, so much hate had been directed at Corgatelli that she bragged about it on her personal Facebook page:

Man, the antis are in overdrive on me lately!! If you want a good laugh at stupidity check out my page!! I’m truly sorry in advance about the language they use…..and they say I’m the one with no class!!! I would never say the stuff to another human that they have said to me!!! SMH

Meanwhile, she referenced two passages from the Book of Genesis as a means of defending her trip and her trade on her public page:

Genesis 9:3 says, “Every moving thing that lives shall be food for you. And as I gave you the green plants, I give you everything.”

Genesis 27:3 says, “Now then, take your weapons, your quiver and your bow, and go out to the field and hunt game for me.”

As of this writing, 13,000 people are fans of Corgatelli’s public page on Facebook. That’s 6,000 more fans that what was listed at the time the Telegraph’s original story was published on Monday.