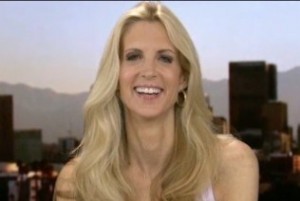 On Friday, Ann Coulter went on Laura Ingraham‘s show and — when the topic turned to Trayvon Martin — she called out the “lynch mob” that’s been going after George Zimmerman. The last time we saw this type of thing on a regular basis, she said, was with the Ku Klux Klan, an “outgrowth” of the Democratic Party.

The frenzy in the media, and attacks toward Zimmerman, Ingraham said, are “beyond irresponsible.” Something “violent could happen toward an innocent person,” she said. Coulter agreed, saying “it’s shocking.” She continued:

“I mean it is a lynch mob. This isn’t how we try cases in this country. And you know, the last time you saw this sort of thing on a regular basis was of course again from the Democratic Party and the Democratic Party’s outgrowth, the KKK. So, I guess we shouldn’t be surprised that we get this from the Democrats. They have never bought into the criminal justice system where you have, you know, grand jurors and a procedure where evidence is vetted, and police look at it and prosecutors and grand jurors.”

Not everything goes to trial, she said. “How about we have a trial on what Chris Matthews’ IQ is?” Coulter quipped. “No, that doesn’t fit in with what the criminal justice system is designed to address. And if the cops and the prosecutor look at a case, look at the evidence and conclude that we don’t have probably cause for an arrest, there won’t be a trial. It’s just a cop-out to say, ‘Well all we want is a trial.'”