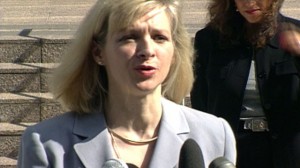 On the heels of her outing by News Corp’s iPad-only The Daily, the inevitable media dissection of Herman Cain accuser Karen Kraushaar has begun in earnest. The Associated Press reports, this morning, that Kraushaar lodged a complaint, while with the INS, that included a tangential reference to a sexually offensive email distributed by a manager there, several years after the Cain allegations caused her departure from the National Restaurant Association.

A woman who settled a sexual harassment complaint against GOP presidential candidate Herman Cain in 1999 complained three years later at her next job about unfair treatment, saying she should be allowed to work from home after a serious car accident and accusing a manager of circulating a sexually charged email, The Associated Press has learned.

The report goes on to allege, on the basis of an unnamed former supervisor of Kraushaar’s, that she demanded “thousands of dollars in payment, a reinstatement of leave she used after the accident earlier in 2002, promotion on the federal pay scale and a one-year fellowship to Harvard’s Kennedy School of Government.”

Kraushaar told the AP that she dropped the complaint, which she described as “relatively minor,” and said she didn’t recall making the demands that the AP alleges she did.

The offensive email described in the story appears to be some version of this bit of sexist yuk-yukkery:

From e-mail forward…
Computers are Like Men…
In order to get their attention, you have to turn them on.
They are supposed to help you solve problems, but half the time they are the problem.
They have a lot of data but are still clueless.
As soon as you commit to one, you realize that, if you had waited a little longer you could have had a better model.
They hear what you say, but not what you mean.

Computers are Like Women…
No one but the Creator understands their internal logic.
The native language they use to communicate with other computers is incomprehensible to everyone else.
Even your smallest mistakes are stored in long-term memory for later retrieval.
As soon as you make a commitment to one, you find yourself spending half your paycheck on accessories for it.
You do the same thing for years, and suddenly it’s wrong.

There’s nothing wrong with the AP’s reporting of the story, but its underlying subtext is disturbing. The report explains that “details of the workplace complaint that Kraushaar made at the immigration service are relevant because they could offer insights into how she responded to conflicts at work,” which is, itself, a somewhat skewed conclusion. The complaint can also be viewed as relevant because it could illustrate the degree to which women are expected to shut up and take it when they have gender-based complaints.

But the real subtext here is that Karen Kraushaar is just the kind of overly-sensitive spoilsport to get her panties in a bunch over a simple height comparison, or an email that’s all in good fun, and who would make unreasonable demands over a minor grievance. She’s obviously an uppity bitch looking for a big payday. Add in the already chugging Drudge-fueled “Obama administration” narrative (even though Kraushaar was a Bush-era hire), and she’s an uppity Democrat bitch.

Even if you take everything in this report at face value, though, what you have is someone reacting reasonably to circumstances that she viewed as unreasonable. She was in a serious car accident, and was denied her request to work from home, when she saw others being allowed to do so.  She thought this was unfair, and she also objected to a supervisor distributing a clearly sexist, inappropriate email.

The fact that this occurred four years after she complained about sexual harassment by Herman Cain is of dubious relevance, and the AP should have pointed that out. Being screwed over in the workplace isn’t like an NFL replay challenge, where if you use ’em all up, you just have to take it.