Art of the Deal Ghostwriter Says Book is ‘Full of Falsehoods,’ Trump is a ‘Sociopath’

Art of the Deal Ghostwriter Says Book is ‘Full of Falsehoods,’ Trump is a ‘Sociopath’ 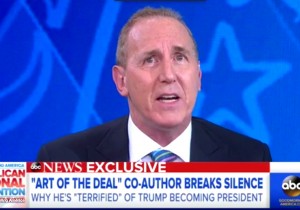 Tony Schwartz, Trump’s ghostwriter on The Art of the Deal, the seminal guidebook on how to wheel and deal like the Donald, has broken his decades-long silence to tell reporters that the book is “full of falsehoods” and that he is “terrified” of a “sociopath” like Trump becoming president.

In a revealing article published this week in The New Yorker, Jane Mayer writes that Schwartz didn’t weigh in on the campaign for months, even though he knew Trump to be a dissembler and had grossly inflated his track record of business success.

[T]he prospect of President Trump terrified him. It wasn’t because of Trump’s ideology—Schwartz doubted that he had one. The problem was Trump’s personality, which he considered pathologically impulsive and self-centered.

[…] “I put lipstick on a pig,” he said. “I feel a deep sense of remorse that I contributed to presenting Trump in a way that brought him wider attention and made him more appealing than he is.” He went on, “I genuinely believe that if Trump wins and gets the nuclear codes there is an excellent possibility it will lead to the end of civilization.”

Schwartz appeared on Good Morning America Monday and said that the book was rife with falsehood and that Trump is full of “sociopathic tendencies.”

WATCH: "Art of the Deal" co-author says he now regrets writing it and says it's full of falsehoods. https://t.co/4Z8r6i2bzv

“Really, what I’m talking about is character, and every American ought to be concerned about his character,” Schwartz said. “I never in a million years thought that he would run for president. If I had thought that 30 years ago, I wouldn’t have written the book.” Schwartz added that he felt it was his “civic duty” to speak out.

“If in any way [the book] contributes to him becoming president, I think this is a man who has more sociopathic tendencies than any candidate in my adult life that I’ve observed. And so, yeah, I do regret writing the book,” he said.