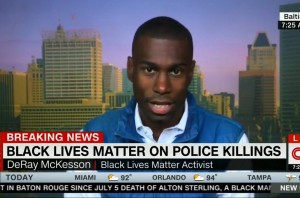 Activist and protest organizer DeRay Mckesson appeared on CNN this morning, where he came up with a curious metaphor to explain why “all lives matter” is a distraction from “black lives matter.”

After three policemen lost their lives to a gunman in Louisiana yesterday, McKesson condemned the shooting and emphasized that #BlackLivesMatter calls for an end to violence on both sides. Mckesson gave his sympathies again during his talk with CNN’s Chris Cuomo, but he blasted #BlackLivesMatter critics for rushing to blame the movement while they refusing to think whether America’s police is becoming “militarized.”

“It’s hard because what we’ve seen over the last 24 hours is people condemn the movement without knowing any facts,” Mckesson said. “The movement has always been rooted in a call to end violence. And like I said, that call remains the call today.”

Mckesson was arrested after his involvement in the recent protests underlying America’s current climate of racial tension, and he previously condemned the violence directed at law enforcement in Dallas.

After Mckesson fended off concerns about some of the more questionable rhetoric to come from #BlackLivesMatter, Cuomo asked for his response to the phrase “all lives matter.”

McKesson’s response was interesting to say the least.

“It’s this interesting thing that people are frustrated that black people are focusing on the unique trauma that Black people are facing in this country. And I would never go to a breast cancer rally and yell out ‘colon cancer matters.’ We know the way Blackness functions in this country is unique and we have to deal with that trauma in a different way. We also know in focusing on Black people, that other people will also benefit when we get to equity and justice. So I think of ‘all lives matter’ as a distraction technique that has probably been one of the most throughline distraction techniques of the moment, but it doesn’t get us away from talking about the key issues at happened.”