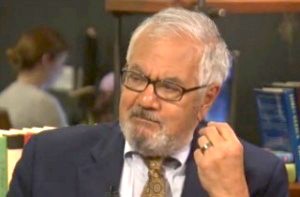 Former representative Barney Frank appeared on HuffPost Live on Tuesday, where he had some tough words for Dennis Hastert. Frank talked about Hastert’s allegations of bank fraud, but used most of the discussion to address Hastert’s “hypocrisy” with regard to his actions as Speaker.

Speaking with Alyona Minkovski, Frank noted that Hastert, along with Newt Gingrich and Bob Livingston, all participated in the impeachment of Bill Clinton, despite facing their own allegations of infidelity and sexual misconduct. “These people get together and impeach Bill Clinton, who looks like almost a virgin in that crowd.”

Frank then brought up the irony of how Hastert twice attempted to pass a constitutional amendment to ban same-sex marriage. “When someone who himself has engaged in same-sex activity then uses his position of great power to try to penalize other people who are doing that, that’s the kind of hypocrisy that should be penalized.”

On the media’s sensationalism of the abuse, Frank said he was troubled that so much attention was going towards Hastert’s involvement in a same-sex relationship. “The problem here was that he was a teacher…imposing himself on an unwilling student,” Franks said. “The fact that it was two guys should be irrelevant.”

Minkovski continued on this point by bringing up how the FBI’s charges against Hastert only focus on the bank fraud involved in the cover-up. When she asked if this was “an abuse of the justice system”, Frank responded that it wasn’t but brought it back to how, “this is a man who had sex with another man, and then tried to make it impossible for me to get married.”

You can watch the interview here: via HuffPost Live: