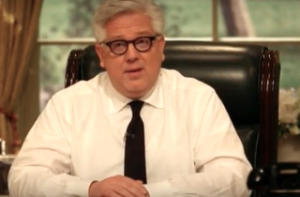 So, Breitbart published an article called “Robert Jeffress Rebukes Glenn Beck for Criticism of Southern Evangelicals,” which quoted Baylor professor Dr. Thomas S. Kidd as saying, “There are many reasons why devout Christians should hesitate to vote for Donald Trump, but God has not revealed Ted Cruz as the divinely anointed alternative, either.” Beck took this to heart and spent quite a while clapping back at them on his show today.

Beck’s devotion to Cruz certainly is religious. He has fasted for the man. He has foretold violence if Cruz is not elected. He even theorized that God killed Justice Antonin Scalia in an effort to guide Cruz to the presidency. All of this was done while using the thinly-veiled rhetoric of “end times” prophecies.

Now, he’s gone full Bible. In his response to Jeffress and Kidd, he preambled for a while and explained why he was deigning to respond at all at least four times and then, he said this:

I have said that I believe he’s given us the opportunity to unite behind Ted Cruz. I believe that Ted is a man of God. I do believe that if we study, pray, and seek God’s inspiration, he will touch our hearts. We will see the truth about the two candidates: Donald Trump and Ted Cruz. And he will inspire us on the truth … I have seen this man’s life. I have watched this man. I have prayed about this man. I have prayed about it by myself, out loud, in quiet, with my family, with my staff, and I happen to believe that Ted Cruz actually was anointed for this time. Would there not be someone that was in the pool that might have the right qualifications for God? Is he that disinterested in all of us? Or is it perhaps possible that just like in the Bible, people were raised from birth for a specific time? Are we that inconsequential, Dr. Kidd? Are we really not that important enough for him to raise someone up, at this critical juncture?

Cruz has mentioned that prayer was one of the reasons he was fired from Fox News. Could the incessant prayer mentioned above be that which got him canned? Note his belief that Cruz was put on this earth by God just to rise up “at this critical juncture” and lead America.

Could Ted Cruz truly be destined, as his wife believes, to show America the face of God?