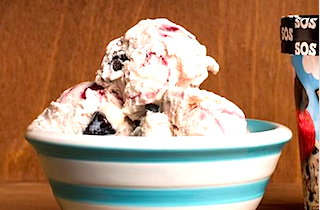 It’s been a big week for Ben & Jerry’s. First, the founders helped kick off Sen. Bernie Sanders’ presidential campaign with an official endorsement and free ice cream for all. Now, they have released a new flavor called Save Our Swirled that aims to combat climate change with every spoonful.

“We created a flavor to bring attention to this historic issue and to send out our own SOS for our planet. It’s called Save Our Swirled, featuring raspberry ice cream, marshmallow and raspberry swirls, plus dark and white fudge ice cream cones,” the company wrote on its website this week.

“But how do we tell the climate change story using ice cream?” they asked rhetorically. “Dig out a chunky spoonful and you can’t help but notice the unique dark and white fudge ice cream cones that appear to be melting. Our stance on climate change and our ice cream is one in the same: If it’s melted, it’s ruined! Save Our Swirled is more than just our newest ‘swirled-class’ flavor: it’s a climate change message you can’t ignore.”

Yes, there are literally delicious melting ice caps in this ice cream.

The effort is aimed more at climate change awareness than direct action, but Ben & Jerry’s has posted a petition on its site that asks customers to “join the climate movement in demanding action from our nation’s leaders” ahead of this year’s UN Climate Summit in Paris.

The goal is to keep global warming below a two degree Celsius rise, which the company has illustrated in a video that shows how its ice cream handles that type of temperature increase. Watch below: