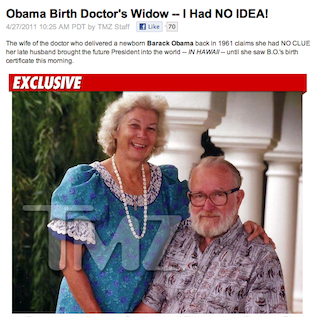 You know, sometimes people hating the president so much that they refuse to even believe he’s even an American can lead to good things. It’s rare but it happens. Take for example the family of Dr. David A. Sinclair who had no idea until a few hours ago that his name was on President Obama’s birth certificate. Ivalee Sinclair, the doctor’s widow, woke up this morning to discover that her late husband was the one who delivered the future leader of the free world. Talk about a nice surprise. TMZ interviewed her today and it’s clear that this was quite a charming little surprise.

And before all of you conspiracy theorists start asking why she didn’t know, Sinclair explained to TMZ’s Harvey Levin that her husband delivered babies all the time and died back in 2003 before he got a chance to maybe recognize the name. It wasn’t until Obama’s keynote speech at the 2004 Democratic National Convention that she and her neighbors realized that guy from Illinois was really a homegrown Hawaiian.

“She continues, ‘I know my husband is just looking down on us smiling.  We had no idea that he delivered President Obama until this morning when we saw the birth certificate … It is very exciting.  I just can’t believe it.  We had no way of knowing.  Everyone is calling us and I’m looking forward to calling all of the family back and informing them that it is true.'”

How nice that the family would get to know this! I guess there was a reason for this whole Birther mess after all. I mean, besides getting that nice, media-starved Mr. Trump some well-deserved publicity.

Check out audio of Levin’s conversation with Sinclair and her son below. Read their report here.