For some reason, the vast majority of Americans can’t get enough of bacon. So Sneakers Bistro in Vermont put up a big sign proudly advertising bacon on it. There’s just one snag: a local Muslim resident wasn’t happy about it and got the bistro to take it down. 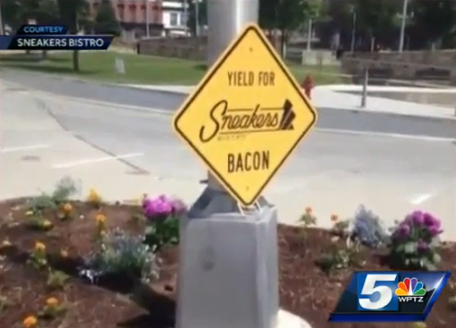 One Muslim woman complained on a public forum that she took offense at the sign. The owners of the bistro ended up reaching out to her. They apologized and took the sign down, saying they didn’t mean to offend anyone with their bacon celebration.

We are here to serve people BREAKFAST, not politics. We removed the sign that was located on public property as… http://t.co/RX8psKBITL

They ended up getting quite a lot of negative reactions.

@Sneakers_Bistro You are idiots. Plain and simple. Just don't advertise at ALL then, because everything could be offensive to someone.

@Sneakers_Bistro are you revamping your whole menu to appease every religion? Or r u just kissing Muslim behind?

Political correctness at its worst! So the picture is worse than sitting next to the bacon while another table eats it? @Sneakers_Bistro

@Sneakers_Bistro Christians should boycott your restaurant on grounds of capitulating to bullies. Word "bacon" is offensive to NOBODY!

@Sneakers_Bistro Isn't BACON part of BREAKFAST? Please realize what Islam does. They demand and demand more and more; it's SUPREMACY.

Watch the video below, via WPTZ: