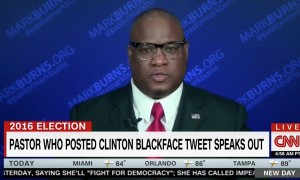 The hits just keep coming for Pastor Mark Burns, the black Donald Trump-supporting man of faith who has found his way into some unsavory headlines as of late.

Burns — billed by TIME as “Trump’s top pastor” — came under fire yesterday for Tweeting out an image of Democratic party nominee Hillary Clinton in blackface, a cartoonish exaggeration of her pandering for African American votes. In the image, Clinton is holding a sign that reads, “#@!* the police” and “I ain’t no ways tired of pandering to African-Americans.”

Burns was forced to backtrack his sentiment Monday night, apologizing for the deleted-Tweeted and saying, “Obviously many people were offended by my tweet and it was not at all my intention… I really am a shepherd to God’s people and the last thing I would want to do is offend people.”

As if one Twitter debacle wasn’t enough to start the week, let’s move onto the next one, shall we?

It would appear as if Pastor Mark Burns is now channeling his inner Trump by Retweeting ridiculously absurd and false images simply because they wind up in his Twitter Notifications. The GOP candidate has a long history of this sort of childish social media non-restraint; readers may remember the teeny tiny flap over an unsavory image of Ted Cruz‘s wife Heidi compared side-by-side to Trump’s own bride Melania. He also retweeted laughably inaccurate statistics about black-on-black crime that look like they were made by a juvenile on Microsoft Paint.

How’s this one for Burns’ follow-up? 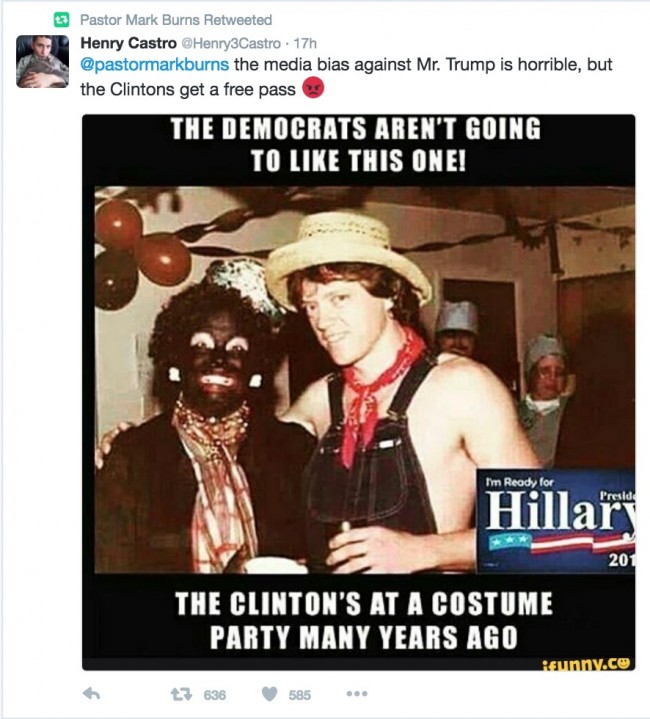 There you have it folks, Bill and Hillary Clinton, just casually dressing up as a farmer and a mammy in blackface.

CNN’s Alisyn Camerota wasn’t standing for any of Burns’ nonsense. This morning on New Day, she cornered Burns directly, saying, “This is not true. This has been disproven, debunks time and again. This has surfaced in previous presidential races. So why share it?”

And here’s the most remarkable part of his admission: “I think that’s the true message of what grace is. One you discover new information you are quick to change your opinion and get back one the right path.”