We’ve documented many times when stories from the stupid hoax news site The National Report tricked people into believing something untrue, and unfortunately today Bloomberg Politics fell for one of their fake stories.

The National Report made up a story about an upcoming History Channel series hosted by Ron Reagan Jr. in which his mother, Nancy Reagan, said that she backs Hillary Clinton in 2016. They “quote” her as saying this, “The time for a woman to serve as our President has come – really, now is the time – and I think the idea of having a former First Lady as the leader of the free world is really quite a marvelous notion. I want Hillary to win. Even though I admire two of the current potential Republican nominees, I have no interest in seeing either of them lead this country.”

Unfortunately, this hoax somehow made it all the way to Bloomberg Politics: 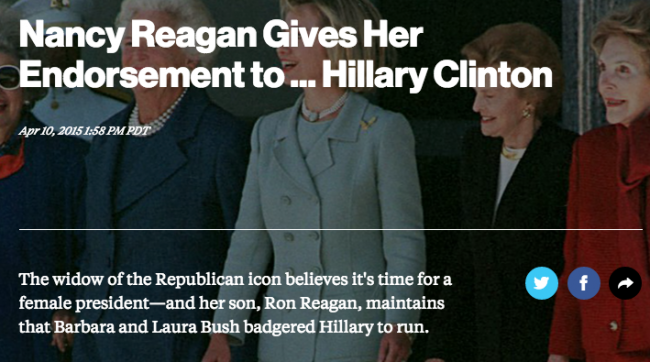 The post, of course, is no longer up, but a cached version still exists, and here’s part of it:

For the GOP, this is slightly awkward. Since Ronald Reagan’s presidency, and especially since his death, the Gipper’s legacy has been worshipfully celebrated, often claimed, by Republican candidates. Senator Rand Paul has called himself “a great believer in Ronald Reagan.” Sen. Lindsey Graham once, applaudingly, called Senator Marco Rubio “the son of Ronald Reagan when it comes to national security.”

@moneyries @jonswaine very very stupid mistake, and one we take very seriously. simple as that.