This is a picture of Bobby Jindal, the Republican Governor of Louisiana: 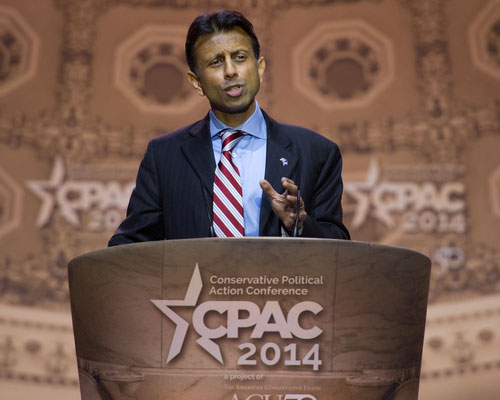 And now this is the portrait of Governor Bobby Jindal that greets visitors at his office, tweeted out by Louisiana political blogger Lamar White:

This is Bobby Jindal's official portrait. Photo credit: Robin May of @theInd pic.twitter.com/QBzSsMOoYZ

The painting is a stunning, life-like recreation of the governor’s countenance:

Louisiana taxpayers should probably ask for a refund on Bobby Jindal's official portrait (via @CenLamar/@TheInd) pic.twitter.com/qUZ5xLCE5M

And also a stinging rebuttal to a recent claim by an MSNBC contributor, who was shunned for his comments claiming that Jindal “might be trying to scrub some of the brown off of his skin” by doubling down on his claims about Muslim “no-go zones” in Europe.

UPDATE (9:09 p.m.): Jindal’s Chief of Staff tipped us off to the following correction, which has the actual official portrait:

White countered that the weird painting (which was, indeed, on loan) was the first thing that visitors see when they reach the floor of the Governor’s office in the Louisiana State Capitol. That’s one way to make a first impression to a visiting delegation, we guess.

We are still not sure whether this looks anything like Jindal.