Bono on Injury: ‘It Is Not Clear That I Will Ever Play Guitar Again’

Bono on Injury: ‘It Is Not Clear That I Will Ever Play Guitar Again’ 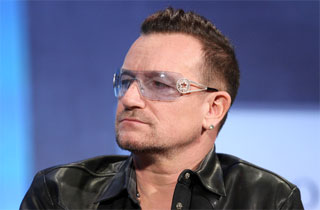 Earlier last month, U2’s Bono shattered his arm in a bike accident, forcing the band to cancel their appearances and landing the singer in the hospital for weeks.

In a post on his blog recapping his year through the alphabet (I is for iTunes, E is for Edge, etc)., Bono addressed the injury for the first time. “This missive is all the communication I can manage for the first half of 2015, beyond muttering and singing to myself of course,” he wrote, and, along with his other thoughts about 2014, revealed the extent of his injuries.

“On the day of my 50th birthday I received an injury because I was over indulging in exercise boxing and cycling, which was itself an overcompensation for overindulging on alcohol coming up to the big birthday,” he said. “I promised myself I would be more mindful of my limits, but just four years on, it happened again — a massive injury I can’t blame on anyone but myself, mainly because I blanked out on impact and have no memory of how I ended up in New York Presbyterian with my humerus bone sticking through my leather jacket. Very punk rock as injuries go.”

I broke my hand, my shoulder, my elbow and my face but the real injury this year was to my Irish pride as it was discovered that under my tracksuit I was wearing yellow and black Lycra cycling shorts. Yes, LYCRA. This is not very rock ‘n’ roll.

Recovery has been more difficult than I thought… As I write this, it is not clear that I will ever play guitar again. The band have reminded me that neither they nor Western civilization are depending on this.

He also thanked Jimmy Fallon for covering for him after his injury forced U2 to drop out of a week as The Tonight Show‘s musical guest, though he joked that Fallon “made [his pain] worse by being a better Bono than I could ever be.”