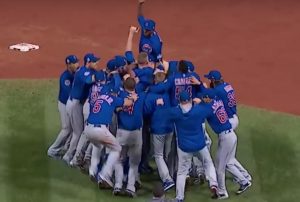 Just four days before President Barack Obama leaves office, the World Series champion Chicago Cubs are going to pay him a visit — in a break with recent tradition which dictates that the champions’ visit take place during the next season.

NBC Chicago first reported that the Cubs, who broke their 108 year World Series drought by finally breaking through this past November, will visit the outgoing President on Monday — just days before the Inauguration of his successor, Donald Trump.

Obama — a longtime fan of the Cubs’ crosstown rivals, the Chicago White Sox — extended the invite on Twitter immediately after the Cubs secured their dramatic Game 7 victory.

It happened: @Cubs win World Series. That’s change even this South Sider can believe in. Want to come to the White House before I leave?

But the early White House visit is not without precedent. The Toronto Blue Jays accepted an invitation from George H.W. Bush to visit in late 1992, before being replaced by Bill Clinton.