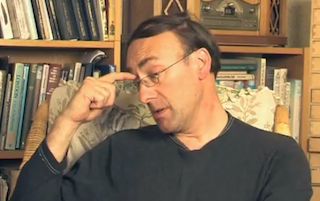 There’s a reason that the vetting process is an integral part of our electorate system. We, as voters, need to know whether Sarah Palin is knowledgable about foreign policy or if Barack Obama…uh…hugged people long before we get into the voting booth. That’s why the British town of Whitby must be so embarrassed to discover that the newly elected member of their Town Council claims to be the son of a giant, green alien.

From The Northern Echo:

“Councillor Simon Parkes, who was elected to represent Stakesby ward on Whitby Town Council last month, said although he has had hundreds of close encounters with extra-terrestrials, it will not interfere with his mission to help residents at the seaside resort.

Speaking on YouTube, Coun Parkes said he first saw an alien at the age of eight months, when ‘a traditional kite-shaped face’, with huge eyes, tiny nostrils and a thin mouth appeared over his cot.

He said: ‘Two green stick things came in. I was aware of some movement over my head. I thought, ‘they’re not mummy’s hands, mummy’s hands are pink’.’

He added: ‘I was looking straight into its face. It enters my mind through my eyes and it sends a message down my optic nerve into my brain.

‘It says ‘I am your real mother, I am your more important mother’.’”

The video in question is from a year ago. It’s a lengthy interview Parkes gave to the AMMACH Project, a group dedicated “to highlighting contactee, abduction and Mind Control issues in the British Isles.” In the video, Parkes goes into detail about “his early life with Reptilians, Greys and the Mantis nonhuman extra-dimensional beings.” All of these beings and elements are actually fairly popular theories in the world of believers.

Of course, like I said, vetting is important. However, Parkes’ political career shouldn’t be hurt by his beliefs. After all, we’ve got Mitt Romney and he’s got all kinds of kooky sci fi/fantasy stuff going on.

No, I don’t mean his Mormon faith. I mean the fact that he’s part cyborg.