Limbaugh Blasts Jeffrey Toobin: Should Know ObamaCare Is ‘Terrible For The United States of America’ 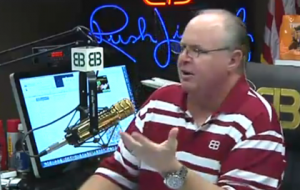 On Rush Limbaugh’s radio program, the conservative radio host had tough words for CNN correspondent Jeffrey Toobin. Limbaugh suggested on his program that Toobin was taken by surprise that the health care law could be considered unconstitutional and scolded him, saying “you ought to be among those who understand this thing is terrible for the United States of America.”

“Here’s Jeff Toobin – he’s in even worse shape today than he was Yesterday,” said Limbaugh, teeing up a clip of CNN’s legal correspondent. “Yesterday it’s a train wreck, today it’s a plane wreck.”

“The question is ‘does the whole law go,’” Toobin told CNN’s Don Lemon. “And there are clearly people on that court – Antonin Scalia and Justice Alito – who think the whole law should go. Chief Justice Roberts and certainly all the liberals were trying to keep alive the possibility that some of this 2700 page law would stand, but there is considerable sentiment on this court that it’s just all one big package and it needs to be gotten rid of altogether which is a stunning turn of events.”

Limbaugh returned from the prerecorded sound bite of Toobin incredulous. “Jeffrey, it is one big package,” said Limbaugh. “You notice how surprised he is? Genuinely, intellectually, IQ-wise surprised that anybody could find this thing objectionable?”

“He really is beside himself and he isn’t alone on the left,” Limbaugh continued. “Jeffrey, where are you on the substance of this? Do you even care – Jeffrey, do you even know what the substance of this bill is? Because as smart as you think you are, you ought to be among those who understand this thing is terrible for the United States of America. I know you’re looking at it whether it is good or bad for Obama, but what about for the country?”

Toobin, a long-time correspondent for CNN, and ABC News before then, is not known for making broadly partisan statements in his nearly two decades covering legal affairs. Toobin’s statements that the government’s defense of health care reform before the Supreme Court were a “train wreck” have generated significant attention.