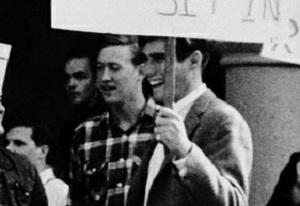 Buzzfeed‘s Andrew Kaczynski has unearthed yet another curio from the knick-knack cabinet of Mitt Romney‘s political life, following up on his site’s publication of a long-lost 1966 photo of the presumptive Republican nominee protesting in support of the Vietnam-era draft. It turns out that, a few years later, Romney told The Boston Globe that “we were brainwashed” about the war, which he described as a “political blunder.”

In 1966, Romney counter-protested a group of students who took over the office of Stanford University president Wallace Sterling, who were, themselves, protesting a precursor to the draft. Buzzfeed dug up a photo of Romney at the protest, along with several dozen other people who were several years away from getting laid.

A few years later, though, Romney was singing a different tune. From Buzzfeed:

But according to a 1970 story that ran in the Boston Globe on the views of children in Nixon’s cabinet, of which his father George was a member, Romney’s views on the Vietnam War shifted with his father’s. By 1970 it appeared the younger Romney was against the war effort.

Willard Mitt Romney, 23, uses his father’s famous remark to show where he stands, “I think we were brainwashed,” says the son of House of Housing and urban Development Secretary George Romney. “If it wasn’t a political blunder to move into Vietnam, I don’t know what is.”
But young Romney agrees with Theodore Stans, 26, son of the Treasury Secretary, that the President’s move into Cambodia was sincerely motivated.

Although this item fits nicely into the “Romney as flip-flopper” narrative, this is an example of where that moniker is unfairly pejorative. There’s absolutely nothing wrong with assessing facts, as you learn them, and coming to a new conclusion. That’s actually something that should be encouraged in a leader.

If there’s anything potentially damaging about this story, it’s that Romney protested in favor of the draft, while he avoided being sent to Vietnam by doing Mormon missionary work in France. That plays into another popular anti-Romney narrative, the out-of-touch rich guy, insulated by privilege from average people.

Romney currently has a huge polling lead over President Obama with military veterans, but President Obama made news this past weekend by calling treatment of returning Vietnam vets “a national shame” during his Memorial Day address, and has been pushing jobs legislation for veterans. It’s unclear that something like this would make any difference, however, since questions about military service have failed to stick to Republicans in the past.