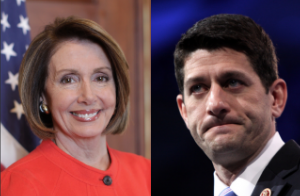 Boston Globe: Paul Ryan, what are you afraid of?

USA Today: #NoBillNoBreak, and no cameras, either

Ah, those eeeeevil Republicans… embracing Orwellian censorship by shutting off C-SPAN cameras to hide the world from democracy in action and of Democrats in the House who via a sit-in were simply trying to do the right thing on gun control measures. Even the barely-relevant Trevor Noah got into the act with the usual bias by omission (some call that “dishonesty”) by mocking Ryan for cutting off the feed without ever mentioning the precedent behind it. No matter… he’s allegedly just a comedian, right?

Per the Boston Globe’s editorial board, which kicked off its screed with this…

A CLUMSY ACT of censorship by House Republicans Wednesday says more about the party’s timidity than it could possibly have intended. The Republican leadership abruptly shut down the video feed from the House floor to prevent CSPAN viewers from seeing a protest by House Democrats, who were pressing for action on gun control.

And ended with this…

History proved why 19th-century proslavery politicians had good reason to fear what would happen if they didn’t go to such extraordinary lengths to prevent debate. Mr. Speaker, what are you afraid of?

Of course, never once in the Globe’s pious preaching on censorship did they once include this little tidbit from 2006. Per the Associated Press:

Pelosi says no to C-SPAN request on floor proceedings

Speaker-to-be Nancy Pelosi cited the need to preserve the ”dignity and decorum” of the House as she rejected a request Friday that C-SPAN operate its own cameras in covering the chamber.

The public service network has provided gavel-to-gavel television coverage of House proceedings since 1979. But the House leader has kept control of the cameras, with coverage generally limited to tight shots of the speaker or the podium.

The situation is similar in the Senate, which C-SPAN has televised since 1986.

C-SPAN’s chairman and chief executive told Pelosi, D-Calif., that under this arrangement, cameras are prevented ”from taking individual reaction shots or from panning the chamber, leaving viewers with an incomplete picture of what’s happening in the House of Representatives.”

Two years later, GOP members (then a minority) staged a month-long sit-in over an energy bill.

A political press in awe?

Politico: “Democratic aides were furious at the GOP stunt, and reporters were kicked out of the Speaker’s Lobby, the space next to the House floor where they normally interview lawmakers.”

Of course, just like Mr. Ryan, Ms. Pelosi shut down C-SPAN cameras as well. But unlike the 2016 shutdown, there were no editorials asking Nancy Pelosi what she was afraid of. No one in the press breathlessly called the move “historic“. It’s the old Dennis Rodman rule in action…

Review of said Rodman rule (my own invention): When The Worm played for the Pistons and was a rebounding machine that helped the Bad Boys of Detroit dominate in winning back-to-back championships in ’89 and ’90 (a 8-1 record in the Finals during that stretch), every other team in the league hated him, particularly the Chicago Bulls and its fans, who were denied in the playoffs by the Pistons largely due to Rodman’s physical (and occasionally dirty) play when it came to Michael Jordan. But a few years later after MJ came back after leaving the league for a short career in minor league baseball, the Bulls actually signed the loathed Rodman to give its star the rebounder/toughness/intangible factor the team needed to start winning championships again. Rodman helped lead Chicago to three straight before Jordan retired again after the ’98 season. And everyone in the Windy City of embraced the once-hated Rodman as its own.

Shorter version: We hate the other guy/gal who does things seen as dirty, but embrace the suck when he/she is on our team.

That’s politics when it comes to partisan arguments: An action (a sit-in) and result (shutting off C-SPAN cameras by a majority leader) precisely the same. Two very different reactions from the press because of who was hitting the off switch. And the ratings and clicks keep coming in droves because many Americans are now trained to hate the other side so much that they’re blind to the hypocrisy and obvious selective outrage of it all. For more on how bad things are now, check out this study by Pew Research released two days ago titled “Partisanship and Political Animosity in 2016; Highly negative views of the opposing party – and its members”

“Mr. Speaker, turn on this microphone!” Nancy Pelosi demanded during this week’s sit-down, obviously knowing how duplicitous the demand was.

An adoring press eats it all up.