Catholics Are Outraged By ‘Switch-Hitting Senior Citizen’ David Bowie, Because Hey, Why Not? 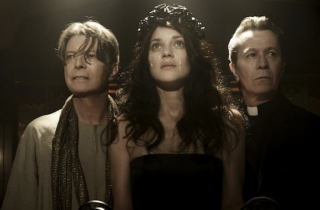 Whether its evangelicals going on tirades every time they are depicted as hypocritical or dimwits, or Muslims taking issue with any pop-culture depiction of the Prophet Mohammed, one thing is for sure: There never seems to be a shortage of opportunities for religious organizations to get outraged over something or another.

The latest in a series of goofy “outrage-over-anything-and-everything”: America’s largest Catholic advocacy group, the Catholic League, is pissed at legendary musician David Bowie for his new music video. And boy, do they have a pithy way of expressing their anger with him.

In a short statement, the group’s CEO Bill Donohue continued his streak of seemingly picking any pop culture target at random and throwing darts at it. He wrote:

David Bowie is back, but hopefully not for long. The switch-hitting, bisexual, senior citizen from London has resurfaced, this time playing a Jesus-like character who hangs out in a nightclub dump frequented by priests, cardinals and half-naked women.

Okay, so this much is clear: the Catholic League really doesn’t like Bowie because his “The Next Day” music video depicts a religious figure in an unseemly manner. Music videos are the propelling force behind the oppression of religious Americans, haven’t you heard?

The video is strewn with characteristic excess: one priest bashes a homeless man, while others are busy hitting on women; self-flagellation is depicted; a dancing gal with bleeding hands makes a stigmata statement; and a customer is served eyeballs on a plate. The lyrics refer to the “priest stiff in hate” and “women dressed as men for the pleasure of that priest.” The song concludes with, “They can work with Satan while they dress with the saints.”

The horror! Not only does Donohue take exception to the depiction of this Jesus-like character, but he seems to fancy himself a film critic: “In short, the video reflects the artist—it is a mess.”

The rest of the statement goes on to diss Bowie for the sin of being publicly confused about religion. Heaven forbid a public figure struggle with faith:

Bowie is nothing if not confused about religion. He once made a public confession: “I was young, fancy free, and Tibetan Buddhism appealed to me at that time. I thought, ‘There’s salvation.’ It didn’t really work. Then I went through Nietzsche, Satanism, Christianity…pottery, and ended up singing. It’s been a long road.” Too bad the pottery didn’t work.

But Bowie didn’t give up trying to figure out who he is. “I’m not quite an atheist and it worries me. There’s a little bit that holds on. Well, I’m almost an atheist. Give me a couple of months.”

Well, Bowie has had more than a couple of months—it’s been ten years since he spoke those words. Not sure what he believes in today (anyone who is “not quite an atheist” is not an atheist), but it’s a sure bet he can’t stop thinking about the Cadillac of all religions, namely Roman Catholicism. There is hope for him yet.

Watch the music video below and see what all the fuss is about: